Familypedia
Register
Don't have an account?
Sign In
Advertisement
in: Historic districts in the United States, National Historic Landmarks in Delaware, National Register of Historic Places in Delaware,
and 7 more

New Castle was originally settled by the Dutch West India Company in 1651, under the leadership of Peter Stuyvesant, on the site of a former aboriginal village, "Tomakonck" ("Place of the Beaver"), to assert their claim to the area based on a prior agreement with the aboriginal inhabitants of the area. The Dutch originally named the settlement Fort Casimir, but this was changed to Fort Trinity (Swedish: Trefaldighet) following its seizure by the colony of New Sweden on Trinity Sunday, 1654. The Dutch conquered the entire colony of New Sweden the following year and rechristened the fort Nieuw-Amstel ("New Amstel"). This marked the end of the Swedish colony in Delaware as an official entity, but it remained a semi-autonomous unit within the New Netherland colony and the cultural, social, and religious influence of the Swedish settlers remained strong. As the settlement grew, Dutch authorities laid out a grid of streets and established the town common (The "Green"), which continue to this day. 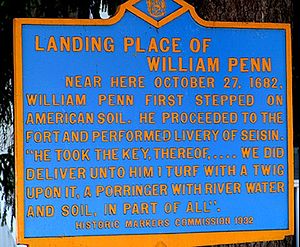 In 1664, the English seized the entire New Netherland colony in the Second Anglo-Dutch War and changed the name of the town to "New Castle." The Dutch regained the town in 1673 during the Third Anglo-Dutch War but it was returned to Great Britain the next year under the Treaty of Westminster. In 1680, New Castle was conveyed to William Penn by the Duke of York by livery of seisin and was Penn's landing place when he first set foot on American soil on October 27, 1682. This transfer to Penn was contested by Lord Baltimore and the boundary dispute was not resolved until the survey conducted by Mason and Dixon, now famed in history as the Mason-Dixon Line.[2][3]

The spire on top of the Court House, Delaware's Colonial capitol and first state house, was used as the center of the Twelve-Mile Circle forming the northern boundary of Delaware and part of the Mason-Dixon Line. The Delaware River within this radius to the low water mark on the opposite shore is part of Delaware. Thus the Delaware Memorial Bridge was built as an intrastate span by Delaware, without financial participation by neighboring New Jersey.

The traditional Mason-Dixon line is actually west of the state, although all of Delaware's borders were established by this survey team. The line is the traditional dividing mark between the slave states of the south and the free states of the north. Delaware was a slave state, and voted with the south on all north/south issues. Delaware's northernmost county, New Castle, was more industrial and closely aligned with the north, while the southern two counties, Kent and Sussex, remained agricultural and based on slavery. During the Civil War, Delaware was a border state.

Prior to the establishment of Penn's Philadelphia, New Castle was center of government. After being transferred to Penn, Delaware's Swedish, Dutch, and English residents used to the relaxed culture of the Restoration monarchy grew uncomfortable with the more conservative Quaker influence, so Delaware petitioned for a separate legislature, which was finally granted in 1702. Delaware formally broke from Pennsylvania in 1704. New Castle again became the seat of the colonial government, thriving with the various judges and lawyers that fueled the economy. Many smaller houses were torn down and replaced in this era. In February 1777, John McKinley was elected the first President of Delaware (a title later renamed "Governor"). During the Revolution, when New Castle was besieged by William Howe, the government elected to move its functions south to Dover in May 1777, which pleased the representatives from Kent and Sussex, anyway. McKinley was captured by the British and held prisoner for several months. New Castle remained the county seat until after the Civil War, when that status was transferred to Wilmington. Two signers of the Declaration of Independence were from New Castle — Thomas McKean and George Read.

The 16-mile (26 km) portage between the Delaware River and Chesapeake Bay saved a 400-mile (640 km) trip around the Delmarva Peninsula, so this brought passengers, goods, and business to New Castle's port. In the years following the Revolution, a turnpike was built to facilitate travel between the two major waterways. Later, New Castle became the eastern terminus of the New Castle and Frenchtown Railroad, the second-oldest rail line in the country, launched in 1828 with horse-drawn rail cars, then converting to steam power when an engine was purchased from Great Britain in 1832. The line traversed the Delmarva Peninsula, running to the Elk River, Maryland, from where passengers changed to packet boats for further travel to Baltimore and points south. This helped the New Castle economy to further boom; however, by 1840, rail lines were in place between Philadelphia and Baltimore, which had a stop in Wilmington, thus leaving New Castle to deal with a substantial decline in traffic and revenue.

The decline in New Castle's economy had the long-range fortunate effect of preventing most residents from making any significant structural changes to their homes. So, the many buildings of historic New Castle look much as they did in the colonial and Federal periods.

New Castle has a tradition, dating back to 1927, of tours of historical homes, churches, and gardens. These tours, called "A Day in Olde New Castle", are usually held on the third Saturday of May. Householders dress in colonial costumes and an admittance fee is collected which is used toward the maintenance of the town's many historic buildings. In June the town holds its annual Separation Day celebration.

The New Castle Historic District is an area approximately 4 by 5 blocks square in the center of town with about 500 historic buildings that date from c. 1700 to 1940.

It is a site significant for its architecture from the 17th, 18th, and 19th centuries. New Castle was founded by Peter Stuyvesant.

Among the structures located in the Historic District are:

The Bellanca Airfield, located outside of the Historic District, is the of the former Bellanca Aircraft Corporation factory (1928–1960) which built over 3,000 airplanes. Delaware Aviation Hall of Fame Museum is located in hangar. Also nearby are Buena Vista, Glebe House, The Hermitage, New Castle Ice Piers, Penn Farm of the Trustees of the New Castle Common, and Swanwyck, all listed on the National Register of Historic Places.[4]

This city is the home of Broad Dyke, the first dyke built in the United States.

There were 2,012 households out of which 26.2% had children under the age of 18 living with them, 47.1% were married couples living together, 14.9% had a female householder with no husband present, and 33.4% were non-families. 27.7% of all households were made up of individuals and 9.8% had someone living alone who was 65 years of age or older. The average household size was 2.42 and the average family size was 2.93.

New Castle has served as the filming location for numerous films and television series including: Dead Poets Society, Beloved (film), and River Ridge.