Familypedia
Register
Don't have an account?
Sign In
Advertisement
in: Whitney (surname), Born in 1795, Died in 1850,
and 14 more

Newel Kimball Whitney was a prominent member and leader in the Latter Day Saint movement and an American businessman. He married Elizabeth Ann Smith on 20 Oct. 1822, in Geauga County, OH. He served as Bishop of Kirtland, Ohio, Far West, Missouri, and Nauvoo, Illinois. He also served as the second Presiding Bishop of The Church of Jesus Christ of Latter-day Saints (LDS Church) from 1847 until his death. He died in 1850 of pleurisy.

By 1827 Whitney had entered into a partnership with Algernon Sidney Gilbert to run a store in Kirtland known as N.K. Whitney & Co. It would later become Mormonism's first "bishop's storehouse." The building was also used by Church founder and president Joseph Smith (1805-1844) as a home and office. Joseph received 16 revelations (D&C 84 through D&C 98 and D&C 101) in the Whitney Store and used one of the rooms as a meeting place for the School of the Prophets, a place where many spiritual manifestations were received. In D&C 72 he was called to be a bishop, serving alongside Edward Partridge, who was the church's first bishop.

One of the earliest missionary expeditions of The Church of Jesus Christ of Latter-day Saints, the First Lamanite Mission commenced in October 1830 in New York with the call of Oliver Cowdery (1806-1850), "second elder" in the Church; Peter Whitmer (1809-1836); Parley P. Pratt (1807-1857); and Ziba Peterson (1810-1849) (D&C 28:8;32:1-3). It initiated the long continuing Church practice of taking the gospel to Native Americans. The Book of Mormon, in part a record of American Indian origins, prophesies that the Lamanites will assist in building the millennial New Jerusalem (3 Ne. 20-21), to be located in the Western Hemisphere (Ether 13:3-6; cf. D&C 28:9). They traveled over a thousand miles in mid-winter weather to indian territory located west of Independence, Missouri.

While not having any notable success with these indeginous people, the missionaries did have some remarkable success with several white settlements along the way, particularly around northeastern Ohio resulting in over 130 converts that included some future leaders of the church and the relocation of the church from New York to Kirtland, Ohio in early 1831. The mission also had success among the settlers in Jackson County, Missouri leading both communities to become important religious centers for the new church.[1][2]

This mission directly led to Newel to joining this new Church along with many associates and family members living in this area.

While in Nauvoo, Illinois, Whitney was involved in some important developments within the Church. One of these occurred on May 4, 1842 when Whitney, along with a group of nine others, met in the upper story of the Red Brick Store. Those who were there, including Whitney, became part of Joseph Smith's Quorum of the Anointed.[2] Later, Whitney's wife, Elizabeth Ann, was added to that group.

Another development was polygamy. In 1842, after being taught the doctrine of polygamy, Whitney and Elizabeth Ann agreed to let their daughter, Sarah Ann Whitney (1825-1873), become a plural wife of Joseph Smith.[3] 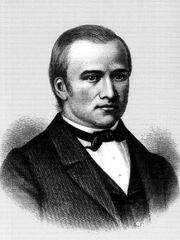