Familypedia
Register
Don't have an account?
Sign In
Advertisement
in: Webster (surname), Born in 1758, Died in 1843,
and 23 more

Webster was born in the Western Division of Hartford (which became West Hartford, Connecticut) to an established family. His father Noah Sr. (1722–1813) was a descendant of Connecticut Governor John Webster; his mother Mercy (Steele) Webster (1727–1794) was a descendant of Governor William Bradford of Plymouth Colony.[1] His father was primarily a farmer, though he was also deacon of the local Congregational church, captain of the town's militia, and a founder of a local book society (a precursor to the public library).[2] After American independence, he was appointed a justice of the peace.[3]

Webster's father never attended college, but he was intellectually curious and prized education. Webster's mother spent long hours teaching her children spelling, mathematics, and music.[4] At age six, Webster began attending a dilapidated one-room primary school built by West Hartford's Ecclesiastical Society. Years later, he described the teachers as the "dregs of humanity" and complained that the instruction was mainly in religion.[5] Webster's experiences there motivated him to improve the educational experience of future generations.[6] 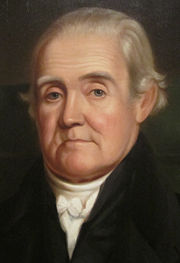