Familypedia
Register
Don't have an account?
Sign In
Advertisement
in: Pages with broken file links, Counties of Norway, Nord-Trøndelag

Nord-Trøndelag (help·info) is a county in the central Norwegian region called Trøndelag.

Nord-Trøndelag borders Nordland to the north, Sør-Trøndelag to the south, Sweden to the east, and the Norwegian Sea to the west. The county seat is Steinkjer, with 20,527 inhabitants (2005). The largest lake is Snåsavatnet; the largest river is Namsen, one of the best salmon rivers in Europe. Other well known salmon rivers are as Verdalselva and Stjørdalselva. Salsvatnet is the second deepest lake in Europe, with a maximum depth of 482 m. Another lake in the area is Byavatnet. Stjørdal is the fastest growing municipality in the county. There are local hospitals in Levanger and Namsos.

A large part of the population lives near the large Trondheimsfjord, which is a central feature of the southern part of this county. Areas on the eastern and northeastern shore of the fjord (mainly in Stjørdal, Frosta, Levanger, Inderøy, Verdal, and Steinkjer) are fertile agricultural lowland, with grain fields and vegetables. Together with the grain fields in the Namdalen lowland, this forms the most northern grain cultivation area in Norway today.

However, the spruce dominated forest (some birch) covers a much larger area, and Nord-Trøndelag is the second largest timber producing county in Norway (after Hedmark). There are mountains near the border with Sweden, and coastal mountains with bare rock at the northern coast. The spruce forests occurs even at the coast, where some areas belong to the Scandinavian coastal conifer forests, a rare European temperate rainforest (boreal rainforest). There are several national parks in the county, among them Blåfjella-Skjækerfjella National Park (one of the largest in Norway [1]), Børgefjell National Park (partly), Lierne National Park and Skarvan og Roltdalen National Park.

Nordlandsbanen, the railway between Trondheim and Bodø runs north-south through the county, offering regional train and commuter train services, the latter branded Trønderbanen. There are also to other lines; Meråkerbanen, part of the line between Trondheim and Stockholm runs from Stjørdal to Meråker and onwards to Sweden. The branch line Namsoslinjen is purely used for freight and goes from Grong to Namsos. None of the railways in Nord-Trøndelag are electrified.

The main airport for all of Trøndelag, Trondheim Airport, Værnes, is located in Stjørdal. This airport, the third largest in Norway, offers services to most primary airports in Norway, including 25 daily flights to Oslo. The international airport also serves daily direct flights to Amsterdam, Copenhagen, London, and Stockholm and weekly flights to other European cities and many charter flights to Southern Europe. It also functions as a hub for Widerøe's regional flights to Namdal and Nordland, including the two regional airports in Nord-Trøndelag, Namsos Airport, Høknesøra and Rørvik Airport, Ryum.

The Coastal Express (No: Hurtigruten) calls at Rørvik in Vikna.

People have lived in this region for thousands of years (see Rock carvings in Central Norway). The Trøndelag region was central in the Viking Age. The most famous battle in Norwegian history, the Battle of Stiklestad, took place at Stiklestad in Verdal.

The coat-of-arms is from modern times (1957) - but it has old roots: A golden cross on a white bottom was the coat-of-arms for Saint Olaf, killed in the Battle of Stiklestad in 1030.

The county is conventionally divided into traditional districts. From south to north, these are Stjørdalen, Innherred, and Namdalen. 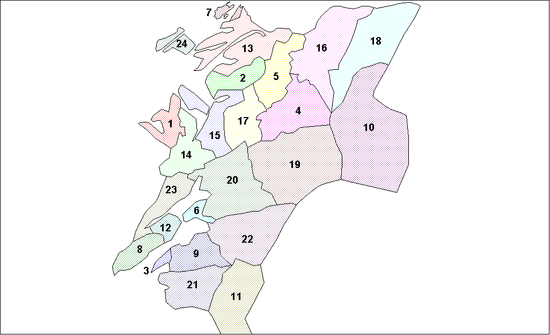 Nord-Trøndelag has a total of 24 municipalities: