Familypedia
Register
Don't have an account?
Sign In
Advertisement
in: Kater (surname), Born in 1874, Died in 1965,
and 8 more

Sir Norman William Kater, M.B., Ch.M., M.L.C., Chevalier de la Legion d'Honneur, represents the third generation of one of the pioneering families of Australia. His grandfather, Mr. H. H. Kater, who was the second son of Captain Henry Kater, of the 12th Regiment, a renowned physicist, and one of the leading scientific men of his time, chartered a ship called the Euphrates and sailed for Australia about the year 1835. He brought with him a number of stud Shorthorn cattle, which formed the nucleus of the well-known Bylong stud, and also a number of blood horses, including Cap-a-pie, Tros, Paraquay, Georgiana, The Giggler, etc. A famous horse, Sir Hercules, was the progeny of Cap-a-pie and Paraquay, and he in turn sired Yattendon, the father of Chester.

Sir Norman Kater's father, the late Mr. Henry Edward Kater, M.L.C., was one of the early settlers, first on the Castlereagh and afterwards on the lower Macquarie, where he and his brother, Edward Harvey Kater, entered into partnership in the joint ownership of Mumblebone Station in the year 1879, and by purchases from the Hon. John Smith laid the foundation of the Mumblebone Stud. The stud was divided in the year 1906. Mr. H. E. Kater took his share to Egelabra, Warren, and entered into partnership with his son (now Sir Norman Kater), forming the firm of H. E. Kater and Son, which has carried on the Egelabra stud up to the present day.

Sir Norman Kater was born at Pennant Hills in 1871, and was educated at All Saints' College, Bathurst, and at the Sydney Grammar School, and took his degree in medicine at the University of Sydney. During his course he gained the Renwlck Scholarship for general proficiency in the first year, and the Haswell prize for biology; and in 1898 he graduated M.B., Ch.M., with honours. He stroked the St. Paul's College crew in 1894 and 1895; rowed No. 2 in University crew in 1896; and stroked a crew which won the maiden and junior fours at the Rowing Association Regatta in 1895. He was appointed resident medical officer at Prince Alfred Hospital in 1897. In addition to his medical practice he acted as honorary demonstrator in anatomy at the Sydney University. Two years later Dr. Kater actively engaged in pastoral pursuits.

In the European war Sir Norman served with distinction. In 1915 he went to Egypt with the Red Cross, and early in the following year he joined the French medical service, and remained with them for almost two years.

During the latter half of his service he was chief surgeon of a French military hospital of 200 beds. For his services he received the Legion of Honour and Medaille de la Reconnaissance Française. On his return to Australia he was appointed adjutant to the principal medical officer in the New South Wales military district with the rank of major. Later he returned to the land, to follow up his pastoral pursuits, and in 1921 was appointed president of the Graziers' Association of New South Wales, which position he held for three years. He was apolnted to the Legislative Council in August, 1922.

Sir Norman Kater holds important positions in the commercial world. He is chairman of directors of the Commonwealth Wool and Produce Co., Ltd., and a director of the Colonial Sugar Refining Co., Ltd., the Graziers' Co-operative Shearing Co., Ltd., and the Globe Worsted Mills. Ltd. He is also a member of the board of reference of The Liverpool and London and Globe Insurance Co., Ltd. He married in 1901 Miss Jean Gaerloch Mackenzie, daughter of the late William Henry MacKenzie, of Canley Vale, and has four sons and two daughters. 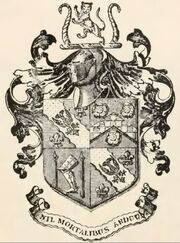