Familypedia
Register
Don't have an account?
Sign In
Advertisement
in: Novgorod Oblast, Established in 1944, Federal subjects of Russia

Novgorod Oblast (Russian: Новгоро́дская о́бласть, Novgorodskaya oblast) is a federal subject of Russia (an oblast), located between Moscow and Saint Petersburg. The administrative center is the city of Veliky Novgorod. Some of the oldest Russian cities, including Veliky Novgorod and Staraya Russa, are located there. The historic monuments of Veliky Novgorod are surroundings have been declared a UNESCO World Heritage Site.

The western part is a lowland around the Lake Ilmen, while the eastern part is a highland (northern spurs of the Valdai Hills).[1] The highest point is Mount Ryzhokha (296 m).

Novgorod Oblast is noted for its science- and labor-intensive sectors, particularly the chemical and forest industries. The engineering and metalworking, electronics, chemical, forest, woodworking, and pulp and paper industries produce nearly half of the oblast's marketable commodities.

The engineering industry accounts for 11%+ of all industrial production. It is characterized by science- and labor-intensive production specializing in the output of sophisticated high-precision machines and equipment, electrical equipment, electronics and radioelectronics, instrument making, and shipbuilding, which developed as a result of the Oblast's maritime location. Production of equipment for the chemical industry has also been established.

The forestry complex, which includes the forest, woodworking, and pulp and paper industries, produces 10.9% of the Oblast's industrial goods. Lumber, plywood, and furniture are some of the products of the woodworking industry. Most of the materials for the wood processing industry are supplied from neighboring Oblasts and republics of Northern district.

The development prospects of the forestry complex are tied to high-end timber processing, greater competitiveness of output products, forest regeneration, and improvements in the Oblast's ecological situation.

Along with specialized sectors, there are others that supplement the economic complex, such as the power industry, which accounts for 16.5% of industrial output. The power industry is represented by low- and medium-power thermal and hydroelectric power plants, including a hydroelectric power plant on the Volkhov River. All the plants are integrated into the Northwestern unified energy system and connected with the unified energy system of European Russia. The metallurgical industry is another supplementary sector. Light industry is represented mainly by the textile, leather shoe, and ceramics industries.

The industrial construction complex has interregional significance. Companies in this sector are located in large and medium-sized cities with access to main highways. They produce reinforced concrete components and structures and other building materials. The glass industry is also well developed in Novgorod Oblast.

Major rivers (sorted by discharge) include: 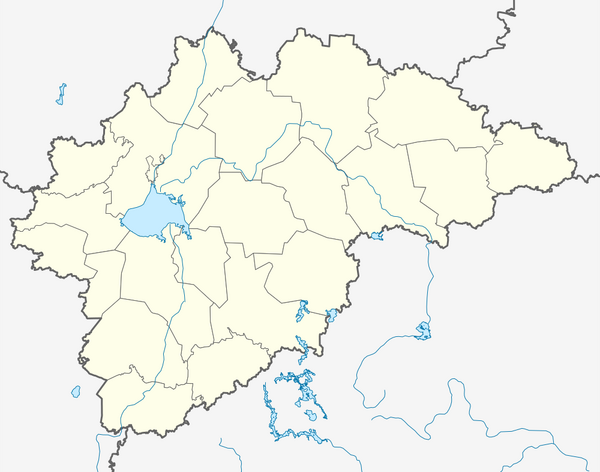 Population: 694,355 (2002 Census), down from about 753,000 in 1989. Novgorod Oblast has the lowest population for any oblast in the European part of Russia. One of the reasons for the relatively low population density is that the area suffered heavily during World War II. The population is 70% urban. There are ten cities and towns.