Familypedia
Register
Don't have an account?
Sign In
Advertisement
in: Pages with broken file links, Oblasts of Ukraine, Subdivisions of Ukraine,
and 4 more

An oblast (Ukrainian: область|) refers to one of Ukraine's 24 primary administrative units. Ukraine is a unitary state, thus, the provinces do not have much legal scope of competence other than that which is established in the Ukrainian Constitution and by law. Articles 140-146 of Chapter XI of the constitution deal directly with local authorities and their competency.

Although Ukraine is a unitary and indivisible state, political and social divisions exist between the northern and western and the southern and eastern portions of the country. This stems from the fact that the western oblasts were only annexed to the Ukrainian Soviet Socialist Republic, a constituent country of the Soviet Union in 1939-1940, whereas the rest of the country was under Soviet Ukrainian control since its inception in 1919.[1]

Along with the 24 oblasts, Ukraine also is subdivided into one autonomous republic (Crimea) and two cities with special status (Kiev, the capital, and Sevastopol, located on the Crimean peninsula, although politically separate from the autonomous republic itself). Each of these regions, as are the oblasts, are further subdivided into raions (districts), ranging in number from 11 to 27 per region (Kiev is divided into 10,[2] while Sevastopol only has four).

An uncommon term in the English language is oblast, where in Ukraine the term is can imply a specific portion of the country, in addition to its use to describe Crimea, which stems mostly from the fact that Crimea was an administrative oblast of Ukraine since it was transferred to the Ukrainian SSR in 1954 up until Ukrainian independence in 1991.[1] The term oblast itself was first introduced in 1932 when the Ukrainian SSR was divided into seven oblasts replacing the previous subdivision system based on okrugs and encompassing 406 raions (districts).[1] The first oblasts were Vinnytsia Oblast, Kiev Oblast, Odessa Oblast, Kharkiv Oblast, and Dnipropetrovsk Oblast. Soon after that in the summer of 1932 there was formed Donetsk Oblast out of eastern parts of Kharkiv and Dnipropetrovsk oblasts and in the fall of 1932 there was formed Chernihiv Oblast on the border of Kiev and Kharkiv oblasts.

Between 1935-1938 there existed several newly created and self-governed okrugs. Upon liquidation of the okrugs in 1937-38 Kiev, Vinnytsia, Odessa, and Kharkiv oblasts were each split into four additional oblasts (Zhytomyr Oblast, Kamianets-Podilsky Oblast (later - Khmelnytsky), Mykolaiv Oblast, Poltava Oblast). Just before the World War II, the Donetsk Oblast was split into Stalin Oblast and Voroshylovhrad Oblast and the Kirovohrad Oblast was created out of portions of Kiev, Mykolaiv and Odessa oblasts.

During World War II Ukraine added eight additional oblasts of the West Ukraine and Bessarabia. Upon the occupation of Ukraine by the Nazi Germany the territory was split between General Government, Kingdom of Romania and Reichskommissariat Ukraine and carried out a completely different administrative division, see Reichskommissariat Ukraine. With the re-establishing of the Soviet power in the state after the war, the administrative division by oblast was resumed adding one more oblast—Zakarpattia. In 1954, the Crimean Oblast was transferred from the Russian Soviet Federative Socialist Republic to the Ukrainian SSR; parts of the surrounding oblasts were incorporated into the Cherkasy Oblast, while Izmail Oblast was absorbed by Odessa Oblast. In 1959, Drohobych Oblast was merged with Lviv Oblast.

Most of Ukraine's oblasts are named after their respective administrative centers, which are also the largest and most developed city in a given region. Each province generally consists of about one to two million of people, ranging anywhere from as low as 904,000 in Chernivtsi Oblast to 4.4 million in the eastern oblast of Donetsk. Each oblast is generally subdivided into about 20 raions (mean average, can range anywhere from 11 in Chernivtsi to 27 in Kharkiv and Vinnytsia Oblasts).

The Ukrainian constitution establishes Ukraine as a unitary state. The specific text of the constitution that refers to the territorial structure is as follows.

The territorial structure of Ukraine is based on the principles of unity and indivisibility of the state territory, the combination of centralisation and decentralisation in the exercise of state power, and the balanced socio-economic development of regions that takes into account their historical, economic, ecological, geographical and demographic characteristics, and ethnic and cultural traditions.
—Constitution of Ukraine, Chapter IX: Territorial Structure of Ukraine, Article 132

Each of Ukraine's oblasts have their own legislative and executive authority, most of which is subordinate to the central government authorities in Kiev. Each region is administered under laws passed by the Ukrainian government and the Constitution of Ukraine. Each region levies its own taxes and, in return, receive a portion of their budget from Kiev, which gives them a portion of the taxes they levy.[3]

Legislative power in the oblast governments is exercised by their respective oblast councils, which in turn supervise the activities of local administrations.[4] They also have considerable budgets managed by an oblast council (Ukrainian: обласна рада|) made up of people's deputies (representatives) voted into office in regional elections every 4 years, the last of which took place in 2010.

The name of each oblast is a relative adjective, formed by adding a feminine suffix to the name of respective center city. E.g. Poltava is a center of Poltavs'ka oblast' (Poltava Oblast). Most of them are also sometimes referred to in a feminine noun form, following the convention of traditional regional place names, ending with the suffix "-shchyna". E.g. Poltava Oblast is also called Poltavshchyna.

Exceptions to this rule include:

Oblasts sometimes referred to as provinces, however, since historically provinces were part of the administrative division of the Russian Empire, territories of which today are often different. For example, the former Volhynian province encompasses the Rivne Oblast, the Volyn Oblast, and also includes some territories in the Ternopil Oblast. 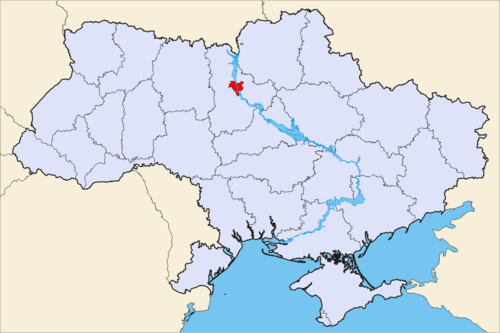 Wikimedia Commons has media related to:
Regions of Ukraine