Demographics movement according to the censuses: 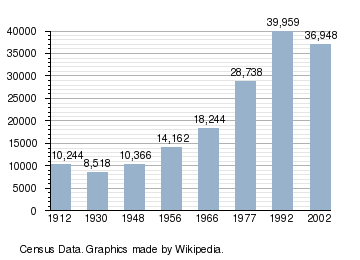 Half the population of the town professes Roman Catholicism (50.05%), while the remaining half is primarily divided between Hungarian Reformed (30.14%), Unitarian (14.71%), and Romanian Orthodox (2.54%) communities.

The town, as the former seat of the Udvarhely comitatus, is one of the historical centres of the Székely Land. The first known reference to the city was in a papal register of duties in 1334 when it was mentioned by its Hungarian name mentioning a sacerdos de Oduorhel.[2] Since 1615, when the Gabriel Bethlen Prince of Transylvania reaffirmed the rights of the town, the place has been referred to as Székelyudvarhely.

Udvarhely was the location of the first assembly of Székelys in 1357. A fortress was built in the town in 1451. It was rebuilt and strengthened by John II Sigismund Zápolya in 1565, in order to control the Székelys. Wallachian Prince Michael the Brave allied with (and Habsburgs destroyed the fortress in 1599 during his campaign in Transylvania. It was repeatedly rebuilt and destroyed again during history. The ruins of the structure are nowadays known as "The Székely-attacked fortress".

The town was historically part of the Székely Land region of Transylvania province. It was the seat of Udvarhelyszék district until the administrative reform of Transylvania in 1876, when it fell within the Udvarhely County in the Kingdom of Hungary. After the Treaty of Trianon of 1920, it became part of Romania and fell within Odorhei County during the interwar period. In 1940, the Second Vienna Award granted the Northern Transylvania to Hungary and the town was held by Hungary until 1944. After Soviet occupation, the Romanian administration returned and it became officially part of Romania in 1947. Between 1952 and 1960, the town fell within the Magyar Autonomous Region, between 1960 and 1968 the Mureş-Magyar Autonomous Region. In 1968, the province was abolished, and since then, the town has been part of Harghita County.[3]

The town and the surrounding villages were hit by a significant flood in August 2005.

A statue park of historical persons of importance for the Székelys was unveiled in the town on May 22, 2004. This gave rise to controversy, as one of the sculptures (The Wandering Szekler) was interpreted in the Romanian press as being the portrait of controversial writer and poet Albert Wass.

Template:Municipalities and Towns of Harghita County