Familypedia
Register
Don't have an account?
Sign In
Advertisement
in: Whitney (surname), Born in 1855, Died in 1931,
and 25 more

Whitney was a politician, journalist, poet, historian and academic. In 1878, as a young man, Whitney began a career in writing with the business office of the LDS newspaper, the Deseret News, later becoming a reporter and the city editor. During a mission in Europe for the LDS Church from 1881 to 1883, he acted as editor of the church publication Millennial Star. In 1896–1897, Whitney taught English and Theology at Brigham Young College, in Logan, Utah.

In 1899, Whitney accepted the position of Assistant Church Historian and served in that position until he was called as an apostle.

Orson was a member of the Quorum of the Twelve Apostles of The Church of Jesus Christ of Latter-day Saints (LDS Church) from April 9, 1906 until his death.

His wife had a brother, Reed Smoot, who was both an elected US Senator, for Utah and an Apostle in the LDS Church.

Taken 1900-Jun-01 at Salt Lake City, 4th Precinct. Residence 45 East 1st North Street - Note his wife Zina had just died earlier in the year, leaving behind one year old twins. His second wife, Mary Wells must have still been living in Mexico, she is not found in the 1900 US Census.

Taken 1910 at the Salt Lakde City 41st District. House 160 on Fourth Avenue. His second wife and their two sons have moved into the home. Byron is listed as a missionary, he may be out of state. 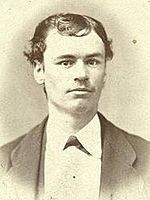