Osburga, Queen of Wessex was born circa 815 in Wessex to Oslac and died circa 854 Wessex of unspecified causes. She married Æthelwulf of Wessex (c795-858) . 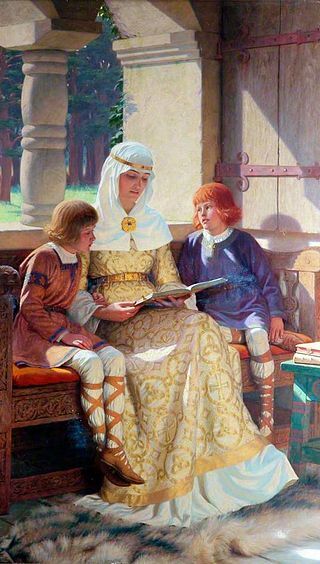 Osburh or Osburga was the first wife of King Æthelwulf of Wessex and mother of Alfred the Great (849-899). Alfred's biographer, Asser, described her as "a most religious woman, noble in character and noble by birth".

Osburh's existence is known only from Asser's Life of King Alfred. She is not named as witness to any charters, nor is her death reported in the Anglo-Saxon Chronicle. So far as is known, she was the mother of all Æthelwulf's children, his five sons Æthelstan, Æthelbald, Æthelberht, Æthelred and Alfred the Great, and his daughter Æthelswith, wife of King Burgred of Mercia.

She is best known for Asser's story about a book of Saxon songs which she showed to Alfred and his brothers, offering to give the book to whoever could first memorise it, a challenge which Alfred took up and won. This exhibits the interest of high status ninth-century women in books, and their role in educating their children.

Osburh was the daughter of Oslac (who is also only known from Asser's Life), King Æthelwulf's pincerna (butler), an important figure in the royal court and household. Oslac is described as a descendant of King Cerdic's Jutish nephews, Stuf and Wihtgar, who conquered the Isle of Wight. and, by this, is also ascribed Geatish/Gothic ancestry.

His mother was Osburga daughter of Oslac of the Isle of Wight, Chief Butler of England. Asser, in his Vita Ælfredi asserts that this shows his lineage from the Jutes of the Isle of Wight. This is unlikely as Bede tells us that they were all slaughtered by the Saxons under Cædwalla.