Ouray County /ˈjʊəreɪ/ is a county located in the U.S. state of Colorado. As of the 2020 census, the population was 4,874.[1] The county seat is Ouray.[2] Because of its rugged mountain topography, Ouray County is also known as the Switzerland of America.

The Ouray County Courthouse was constructed in Ouray in 1888 and is located on the National Register of Historic Places.

Mining operators in the San Juan mountain area of Colorado formed the San Juan District Mining Association (SJDMA) in 1903, as a direct result of a Western Federation of Miners proposal to the Telluride Mining Association for the eight-hour day, which had been approved in a referendum by 72 percent of Colorado voters.[5] The new association consolidated the power of thirty-six mining properties in San Miguel, Ouray, and San Juan counties.[6] The SJDMA refused to consider any reduction in hours or increase in wages, helping to provoke a bitter strike.

From the first election that it participated in, in 1912, until 1944, Ouray County was a swing county that voted for the winner of each election from Woodrow Wilson's 1912 victory to Franklin Roosevelt's 1940 victory, however broke that streak when it voted for Thomas Dewey in 1944. Between 1944 and 2004, it transformed into a Republican stronghold, with Lyndon B. Johnson being the only Democrat to win the county in his 1964 landslide, with Republicans frequently getting 50-60% of the vote, even reaching more than 70% in Richard Nixon's and Ronald Reagan's 49 state landslides in 1972 and 1984. In fact, Nixon and Reagan are the only candidates in history to receive 70% of the vote in the county, and Reagan remains the last candidate in history to receive 70% of the votes there, and the second to last to receive over 60%, the last being George H. W. Bush in 1988. However, starting with Barack Obama's victory in 2008, Ouray County has transformed into a Democratic powerhouse, with Joe Biden winning it by almost 20 points in 2020. At 58.8%, Biden's vote share is the highest of any candidate since George H.W. Bush's 63.9% in 1988.

Ouray County, named Switzerland of America, is home to many parks and hiking trails. The Ridgway State Park is located due north of Ridgway on the Ridgway Reservoir and includes a marina and camping facilities as well as an extensive trail system. Within and surrounding the county are the Uncompahgre National Forest, Mount Sneffels Wilderness, and the Uncompahgre Wilderness. Leading through the county is the Bear Creek National Recreation Trail. Well known for its view of the San Juan Mountains and Cimarron Range, scenic highways such as the Alpine Loop National Scenic Back Country Byway and San Juan Skyway National Scenic Byway exist. The Great Parks Bicycle Route and Western Express Bicycle Route also go through Ouray County.

The Elks Lodge of Ouray County is only one of a very few surviving American locations for a bowling alley facility - a more famous one being Milwaukee, Wisconsin's Holler House - that uses exclusively human-operated pinsetting units to set the tenpins for bowling on its pair of vintage wood bowling lanes.[14]

Ouray County has two home rule municipalities, three census-designated places, and four unincorporated communities. The home rule municipalities are the city of Ouray and town of Ridgway, also the most populous settlements in the county. Loghill Village is the next largest development and is a residential, relatively affluent, community in comparison to the rest of the county. Along with Loghill, Portland and Colona serve as census-designated places within Ouray County. The unincorporated communities within the county are Camp Bird, Dallas, Thistledown, and Eldredge. All the communities, with the exception of Ridgway and Ouray, serve as primarily residential communities, though Loghill Village maintains a small tourism sector.

Colona, Eldredge, and Dallas are located in the northern reaches of the county along U.S. Highway 550, though Eldredge and Dallas are located within the valleys of the San Juan Mountains while Colona is in the short stretch of the Uncompahgre Valley within Ouray County. Portland is placed down valley of Ouray, though still south of Ridgway. Camp Bird and Thistledown are communities placed southwest of Ouray on Camp Bird Road. From north to south the communities are Colona, Eldredge, Dallas, Ridgway, Ouray, and then southwest along Camp Bird Road to Thistledown and Camp Bird. The historic towns of Sneffels and Ironton are located further west from Camp Bird and south of Ouray, respectively. Populations listed below are from the 2010 United States census data.[15] 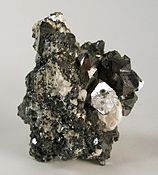