Familypedia
Register
Don't have an account?
Sign In
Advertisement
in: Pages using ISBN magic links, Districts of the City of Westminster, Areas of London

Paddington is a district within the City of Westminster, in west London. Formerly a metropolitan borough, it was integrated with Westminster and Greater London in 1965. Three important landmarks of the district are Paddington station, designed by the celebrated engineer Isambard Kingdom Brunel and opened in 1847; St Mary's Hospital and Paddington Green Police Station (the most important high-security police station in the United Kingdom).

A major project called Paddington Waterside aims to regenerate former railway and canal land between 1998 and 2018, and the area is seeing many new developments.

The earliest extant reference to Padington, historically a part of Middlesex, was made in 1056.

In the later Elizabethan and early Stuart era, the rectory and associated estate houses were occupied by the Small (or Smale) family. Nicholas Small was a clothworker who was sufficiently well connected to have Holbein paint a portrait of his wife, Jane Small. Nicholas died in 1565 and his wife married again, to Nicholas Parkinson, who also resided in Paddington. Parkinson went on to be the master of the Clothworker's company. Jane Small continued to live in Paddington after her second husband's death, and her manor house was big enough to have been let to Sir John Popham, the attorney general, in the 1580s. At this time there was an inn attached to the estate, named Blowers.[1]

By 1773, a contemporary historian determined that "London may now be said to include two cities, one borough and forty six antient villages", Paddington and adjoining Marybone (Marylebone) being named as two of those villages.[2]

Roman roads formed the parish's north-eastern and southern boundaries from Marble Arch: Watling Street (later Edgware Road) and the Uxbridge road, known by the 1860s as Bayswater Road. They were toll roads in the 18th century, before and after the dismantling of the permanent Tyburn gallows "tree" at their junction in 1759. By 1801, the area was also traversed by the Harrow Road and an arm of the Grand Junction Canal (now named Grand Union Canal).[3]:p.174

In the 19th century the part of the parish between Edgware Road and Westbourne Terrace, Gloucester Terrace and Craven Hill, bounded to the south by Bayswater Road, was known as Tyburnia. The district formed the centrepiece of an 1824 masterplan by Samuel Pepys Cockerell to redevelop the Tyburn Estate (Tyburnia being the historic lands of the Bishop of London) into a residential area to rival Belgravia.[4]

The area was laid out in the mid-1800s when grand squares and cream stuccoed terraces started to fill the acres between Paddington station and Hyde Park; however, the plans were never realised in full. Despite this, Thackeray described the residential district of Tyburnia as “the elegant, the prosperous, the polite Tyburnia, the most respectable district of the habitable globe.” [5]

Derivation of the name is uncertain. Speculative explanations include Padre-ing-tun (father's meadow village), Pad-ing-tun (pack-horse meadow village),[6] and Pæding-tun (village of the race of Pæd)[7]:pp.110–111 the last being the cited suggestion of the Victorian Anglo-Saxon scholar John Mitchell Kemble. There is another Paddington in Surrey, recorded in the Domesday Book as "Padendene"[8] and possibly associated with the same ancient family.[9][10] A lord named Padda is named in the Domesday Book, associated with Brampton, Suffolk.[11]

An 18th-century dictionary gives the definition "Paddington Fair Day. An execution day, Tyburn being in the parish or neighbourhood of Paddington. To dance the Paddington frisk ; to be hanged."[12] Public executions were abolished in England in 1868.[13]

In the station are statues of its designer, Isambard Kingdom Brunel, and the children's fiction character Paddington Bear.

Commercial traffic on the Grand Junction Canal (which became the Grand Union Canal in 1929) dwindled because of railway competition in the late-19th and early-20th centuries, and freight then moved from rail to road after World War II, leading to the abandonment of the goods yards in the early 1980s. The land lay derelict until the Paddington Waterside Partnership was established in 1998 to co-ordinate the regeneration of the area between the Westway, Praed Street and Westbourne Terrace. This includes major developments on the goods yard site (now branded PaddingtonCentral) and around the canal (Paddington Basin).

Paddington has a number of Anglican churches, including St James's, St Mary Magdalene's and St Peter's.

The Victorian poet Robert Browning moved from No. 1 Chichester Road to Beauchamp Lodge, 19 Warwick Crescent, in 1862 and lived there until 1887.[3]:pp.199 He is reputed to have named that locality, on the junction of two canals, "Little Venice", a legend that was disputed by Lord Kinross in 1966[15] and by London Canals.[16] Both assert that Lord Byron humorously coined the name, which is now applied more loosely to a longer reach of the canal system.

St Mary's Hospital in Praed Street is the site of several notable medical accomplishments. In 1874, C. R. Alder Wright synthesised heroin (diacetylmorphine). Also there, in 1928, Sir Alexander Fleming first isolated penicillin, earning the award of a Nobel Prize. The hospital has an Alexander Fleming Laboratory Museum[17] where visitors can see Fleming's laboratory, restored to its 1928 condition, and explore the story of Fleming and the discovery and development of penicillin through displays and video.

Edward Wilson, physician, naturalist and ornithologist, who died in 1912 on Captain Robert Scott's ill-fated British Antarctic expedition, had earlier practised as a doctor in Paddington. The former Senior Street primary school was renamed the Edward Wilson School after him in 1951.[3]:pp.266

Between 1805 and 1817, the great actress Sarah Siddons lived at Desborough House,[19] (which was demolished before 1853 to make way for the Great Western Railway) and was buried at Paddington Green, near the later graves of the eminent painters Benjamin Haydon and William Collins.[20]:p.183 Her brother Charles Kemble also built a house, Desborough Lodge, in the vicinity—in which she may have lived later.[3]:p.230 In later years, the actress Yootha Joyce, best known for her part in the classic television comedy George and Mildred, lived at 198 Sussex Gardens.[21]

One of Napoleon's nephews, Prince Louis Lucien Bonaparte (1813-1891), a notable comparative linguist and dialectologist, who spent most of his adult life in England, had a house in Norfolk Terrace, Westbourne Park.[3]:p.200

For education in Paddington, see List of schools in the City of Westminster.

Paddington in literature and film[]

Paddington in the 17th century is one of the settings in the fiction-based-on-fact novel A Spurious Brood, which tells the story of Katherine More, whose children were transported to America on board the Pilgrim Fathers' ship, the Mayflower.

Timothy Forsyte of John Galsworthy's The Forsyte Saga and other relatives resided in Bayswater Road.[24]

The films The Blue Lamp (1950) and Never Let Go (1960) depict many Paddington streets, which suffered bombing in World War II and were subsequently demolished in the early 1960s to make way for the Westway elevated road and the Warwick Estate housing redevelopment. 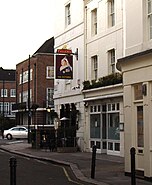