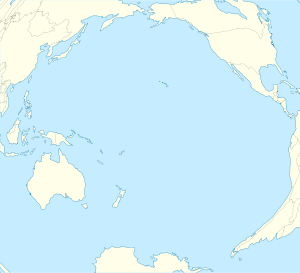 /pælˈmaɪrə/) is an essentially unoccupied equatorial Northern Pacific atoll administered as an unorganized incorporated territory by the United States federal government. The variable temporary population of 4–20 "non-occupants" are essentially staff and scientists employed by various departments of the US government and The Nature Conservancy,[1] as well as a rotating mix of Palmyra Atoll Research Consortium[2] scholars pursuing research.

Palmyra is one of the Northern Line Islands (southeast of Kingman Reef and north of Kiribati Line Islands), located almost due south of the Hawaiian Islands, roughly halfway between Hawaii and American Samoa. The atoll is 4.6 sq mi (12 km2), and it is located in the equatorial Northern Pacific Ocean. Its 9 mi (14 km) of coastline has one anchorage known as West Lagoon.

The atoll consists of an extensive reef, two shallow lagoons, and some 50 sand and reef-rock islets and bars covered with vegetation—mostly coconut trees, Scaevola, and tall Pisonia trees.

The islets of the atoll are all connected, except Sand Island and the two Home Islets in the west and Barren Island in the east. The largest island is Cooper Island in the north, followed by Kaula Island in the south. The northern arch of islets is formed by Strawn Island, Cooper Island, Aviation Island, Quail Island, Whippoorwill Island, followed in the east by Eastern Island, Papala Island, and Pelican Island, and in the south by Bird Island, Holei Island, Engineer Island, Tanager Island, Marine Island, Kaula Island, Paradise Island, and Home Island (clockwise). Average annual rainfall is approximately 175 in (4,400 mm) per year. Daytime temperatures average 85 °F (29 °C) year round.

Palmyra is an incorporated territory of the United States (the only such territory in existence since 1959), meaning that it is subject to all provisions of the U.S. Constitution and that is permanently under American sovereignty. However, since Palmyra is also an unorganized territory, there is no Act of Congress specifying how Palmyra should be governed. Palmyra is also uninhabited, as far as permanent residents are concerned.

The issue of the governing of Palmyra is generally a moot point, since there is no permanent population remaining there, nor any reason to think that there will be in the future. Palmyra is the only unorganized incorporated territory of the United States. Cooper Island in this atoll is owned by The Nature Conservancy, and it is managed as a nature reserve. The rest of Palmyra is Federal land and waters under the jurisdiction of the U.S. Fish and Wildlife Service.[4] Since Palmyra has no local government at all, it is administered directly from Washington, D.C., by the Office of Insular Affairs, of the U.S. Department of the Interior.

For all other purposes, Palmyra is counted as one of the U.S. Minor Outlying Islands.

There is no current economic activity on Palmyra. Most of the roads and causeways there were built during WW II. All of these are now unserviceable and overgrown with bushes and grass. There is a 2,000-meter-long, unpaved, airstrip on Cooper Island (Palmyra (Cooper) Airport, ICAO code PLPA), that was built for the Navy during WW II.

Palmyra has been occupied, off and on, by a group of scientists, Nature Conservancy members, and volunteers, and representatives of the Fish & Wildlife (up to 20 people in total) for the past decade.

A construction program in 2004 consisted of several two-person bungalows and showers for the temporary residents. Fresh water is collected from the roof of a concrete building in this area. The communal buildings of the area on the north side of Cooper Island (the only occupied area of the atoll) consist of a common cooking and dining building next to the only sea dock, and there a kayak and scuba diving equipment storage building next to this.

Palmyra Atoll's location in the Pacific Ocean, where the southern and northern currents meet, means that its beaches are littered with trash and debris. Washed-up plastic mooring buoys and plastic bottles are plentiful on the beaches of Palmyra.

Palmyra was sighted in 1798 by the American sea captain Edmund Fanning of Stonington, Connecticut while his ship, the Betsy, was sailing to Asia. According to the accounts, Fanning had awoken three times during the night before. On the third time, he took this as a premonition, and he ordered his first mate to heave to. On the next morning the ship resumed its travel, but she only went about a nautical mile before reaching the reef of Palmyra. Had the ship continued on her course at night, the ship might have been wrecked.[5] On November 7, 1802, Captain Sawle and the U.S.S. Palmyra shipwrecked on the reef, which ultimately took the name of this vessel.

In 1859, Palmyra Atoll was claimed for the United States by Dr. Gerrit P. Judd of the brig Josephine, in accordance with the Guano Islands Act of 1856, but there was no guano there to be mined. On February 26, 1862, King Kamehameha IV of the Hawaiian Islands commissioned Captain Zenas Bent and Johnson Beswick Wilkinson, both Hawaiian citizens, to take possession of the atoll, and on April 15, 1862, it was formally annexed to the Kingdom of Hawaii.[6]

Throughout the next century, ownership of the atoll passed through various hands. Bent sold his rights to Palmyra to Wilkinson on December 24, 1862, and the atoll was owned by Kalama Wilkinson (Johnson's widow) through 1885. It was then divided between three heirs, two of whom immediately gave their rights to William Luther Wilcox who, in turn, gave them to the Pacific Navigation Company. In 1897, this company was liquidated, and its interests were sold first to William Ansel Kinney, and then to Fred Wunderburg.[7]

Then in 1889, Commander Nichols of the British ship HMS Cormorant claimed Palmyra for the United Kingdom, unaware of the prior claim made by the Kingdom of Hawaii.[9]

In 1898, Palmyra was annexed to the United States along with the overall annexation of the Hawaiian Islands, and on June 14, 1900, Palmyra became part of the new Territory of Hawaii.[6] To end all British claims, a second act of annexation by the U.S. Government was made in 1911. This Act of Congress made Palmyra the only "incorporated territory" of the United States at that time.

Since the Panama Canal was about to open up, the Palmyra's location became important. The British Empire had established a submarine cable station for the All Red Line on nearby Fanning Island.[10] Hence the warship USS West Virginia was dispatched to Palmyra, on February 21, 1912, she formally reaffirmed the American claim on Palmyra.[6]

In 1912, Henry Ernest Cooper (1857–1929) acquired William Ringer's property rights to Palmyra and, after a challenge in court, he became the sole owner of the atoll.[8] Cooper visited the island in July 1913 with the scientists Charles Montague Cooke, Jr., and Joseph F. Rock, who wrote up a scientific description of the atoll.[11]

Cooper sold the whole atoll except two minor islets to Leslie and Ellen Fullard-Leo on August 19, 1922 for $15,000. These two people established the Palmyra Copra Company to harvest the coconuts growing on the atoll. Their three sons, including actor Leslie Vincent, continued as the owners afterwards, except for the period of administration by the U.S. Navy during World War II (1940–1945).

Palmyra under the jurisdiction of the U.S. Navy[]

In 1934, Johnston Atoll, Kingman Reef, and Palmyra were placed under the jurisdiction of the U.S. Department of the Navy. The Navy took over the atoll for use as the Palmyra Island Naval Air Station on August 15, 1941. From November 1939 through 1947, the atoll had resident Federal Government representatives, the island commanders.

Following World War II, much of the Naval Air Station there was demolished, with some of the materials piled up and burned on the atoll, dumped into the lagoon, or in the case of unexploded ordnance on some of the islets, left in place.[12] After the war, the Fullard-Leo family sued for the return of the ownership of Palmyra Atoll to themselves all the way up to the Supreme Court. The family won its court case in 1947. The Cooper family still owns two of the five islands.[6]

When Hawaii was admitted to the United States in 1959, Palmyra was explicitly separated from the new state as a federal incorporated territory, administered by the U.S. Department of the Interior.[6] In 1962, the U.S. Department of Defense used Palmyra as an observation site during several high-altitude nuclear weapons tests high above Johnston Atoll. A group of about ten men supported the observation posts during this series of tests, while about 40 people came for the actual tests to carry out the observations using their technical equipment.

In December 2000, most of Palmyra Atoll was bought by The Nature Conservancy[6] for coral reef conservation and research. In 2003, a scientific study was published about fossilized coral that was washing up on Palmyra. This fossilized coral was examined for evidence of the behavior of the effect of El Niño on the tropical Pacific Ocean over the past 1,000 years.[13]

In November 2005, a team of scientists joined with The Nature Conservancy to open up a new research station on Palmyra to study global warming, the disappearing coral reefs, invasive species, and other environmental concerns.[14]

The Pacific Remote Islands Marine National Monument, including Palmyra Atoll, was established on January 6, 2009. The Secretary of the Interior has delegated the responsibility for supervising this National Monument to the U.S. Fish and Wildlife Service.[15]

On January 18, 2001, the Secretary of the Interior signed an order designating Palmyra’s tidal lands, submerged lands, and surrounding waters out to 12 nautical miles (22 km) from the water’s edge as a National Wildlife Refuge. Subsequently, the Department of the Interior published a regulation providing for the management of the refuge. 66 Fed. Reg. 7660-01 (January 24, 2001). The regulation states, in pertinent part, as follows:

"We will close the refuge to commercial fishing but will permit a low level of compatible recreational fishing for bonefishing and deep water sportfishing under programs that we will carefully manage to ensure compatibility with refuge purposes. . . . Management actions will include protection of the refuge waters and wildlife from commercial fishing activities."

In March 2003, The Nature Conservancy conveyed 416 acres (1.683 km2) of the emergent land of Palmyra to the United States to be included in the refuge. It subsequently added 28 more acres to the conveyance.

In January 2007, several parties sued the United States in the Court of Federal Claims alleging that, under the Takings Clause, the Interior Department regulation had “directly confiscated, taken, and rendered wholly and completely worthless” their purported property interests. The United States filed a motion to dismiss the lawsuit, and the court granted the motion.[16] On April 9, 2009, the court's decision was affirmed by the Court of Appeals for the Federal Circuit.[17]

As of July 2009, limited visits to the refuge are allowed, including by private recreational sailboat or motorboat. Visits must have prior approval, with access to Cooper Island arranged through the Nature Conservancy.[18]

In 1974, Palmyra was the site of the double murder of a wealthy San Diego couple, Malcolm "Mac" Graham and his wife, Eleanor "Muff" Graham.[19] The mysterious deaths, murder conviction of Duane (“Buck”) Walker (aka Wesley G. Walker) and acquittal of his girlfriend, Stephanie Stearns, made headlines nationwide and led to a best-selling account written by Stearns's defense attorney, Vincent Bugliosi, and Bruce B. Henderson in the true crime book And the Sea Will Tell. The book led to a CBS television miniseries by the same name starring James Brolin, Rachel Ward and Hart Bochner. The story was also depicted in The FBI Files.