Familypedia
Register
Don't have an account?
Sign In
Advertisement
in: Chase (surname), Born in 1878, Died in 1946,
and 4 more

Paul Ashley Chase (February 5, 1878 – April 17, 1946) was one of the founding executives, first auditor, Assistant Secretary of the corporation, and comptroller for Warner Brothers Pictures. He was previously the traveling auditor for the Erie Railroad. In 1912 Harry Warner and Paul Chase were staying at the same boarding house in New York City. Harry Warner told Chase he was starting a new motion picture company and offered him the auditorship of the concern, which Chase immediately accepted. [1]

Born in Churubusco, Indiana, he spent his youth and young manhood in Leroy, Illinois where his father George Boyd Chase owned and operated a jewelry store. His first job was as a telegrapher for a railroad company however he had a natural aptitude for numbers and eventually became the traveling auditor for the Erie Railroad.[1]

He settled in New York City where he eventually met Harry Warner. He joined the Warner organization in 1912 and came to Hollywood in 1923; he served as controller for more than 25 years. [2]

After Warner Brothers Pictures officially incorporated in 1923 under the name Warner Bros. Pictures, Inc., he accepted the position of comptroller and established the comptroller’s office at the Sunset studios and the accounting department at the Sunset Bowling Center. [1]

At the time of Paul Chase’s death, he was the oldest employee (retired), in years of service, and one of the founding executives of Warner Brothers Pictures. His death was due to heart complications. He died April 17, 1946 at his home in North Hollywood, California. [1] He was survived by his widow and his daughter Esta Miller and grandchildren Diana Miller and Kristina Miller. [2]

Warner Brothers' oldest employee, in years of service, passed to a greater reward, at his home in North Hollywood Wednesday, April 17, when death claimed our retired comptroller Paul Ashley Chase. Death was due to ...

Paul A. Chase, controller of Warner Brothers ... Mr. Chase met Harry B. Warner while both were living in a New York boarding ... 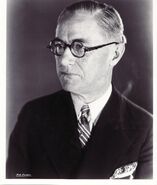