Familypedia
Register
Don't have an account?
Sign In
Advertisement
in: Delano (surname), Born in 1775, Died in 1842,
and 6 more

Captain Paul Delano, (AKA: Paul Jefferson Delano, Paul Delano Tripp) born in Fairhaven, Massachusetts, was a sea captain and a member of the prominent American Delano family. He moved to Chile as Captain of the Curiacio where he arrived in June 22, 1819 and became an important part of that country's First Chilean Navy Squadron. He came with his two sons, Paul H., and William.[1]:{{{1}}}

Paul Delano was commissioned as a captain and commanded sixteen troop transports of the Freedom Expedition of Perú and later he commanded the Lautaro.

In 1822 he became Captain of the port of Valparaíso where he directed the building of the first wharf and the first lighthouse of the port in 1837.

His son, Paul H. Delano, became Admiral Cochrane's personal aide and, at fourteen years of age, was given command of one of the boarding parties during the capture of the Esmeralda (1791) in the port of Callao on 5 November 1820. 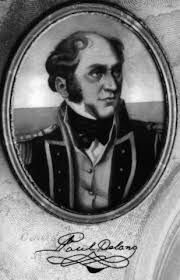