Familypedia
Register
Don't have an account?
Sign In
Advertisement
in: Morton (surname), Born in 1751, Died in 1837,
and 15 more

Morton was born in Plymouth, Massachusetts in 1751, and raised in Boston. His father, Joseph Morton, worked as a tavern-keeper at the White Horse Tavern. Perez attended the Boston Latin School starting around 1760, and Harvard College, graduating in 1771.[1] He was admitted to the Massachusetts bar in 1774.

He participated in the Committee of Safety, and the Committee of Correspondence; he was also a Mason, serving as Deputy Grand Master of the Grand Lodge of Massachusetts in 1789-1790.[2] In 1775-1776, he was Deputy Secretary of the Council of the Colony of Massachusetts Bay.[3] On April 8, 1776, Morton spoke at the memorial service held for Joseph Warren, at King's Chapel.[4]

In 1788, the Mortons were the subject of a public scandal regarding an illegitimate child of Sarah Morton's sister, Fanny Apthorp, rumored to have had an affair with Perez. The scandal was amplified in the press, notably the Massachusetts Centinel and the Herald of Freedom and the Federal Advertiser. A novel published in 1789, The Power of Sympathy, written by a neighbor of the Mortons, William Hill Brown, depicted an adulterous affair between a man and his sister-in-law; at the time, many suspected the novel to be based on the real-life Morton/Apthorp affair.[8]

Portraits of Morton have been made by Charles Balthazar Julien Févret de Saint-Mémin, and others.[10][11] Some items owned by Perez Morton are now in the collection of the Museum of Fine Arts, Boston, including a silver ladle made by Paul Revere.[11]

Morton's daughter Charlotte was the wife of Andrew Dexter, Jr.[12] 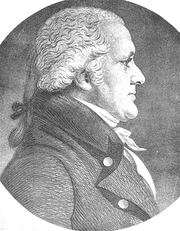