Edit Facts
Peter Pickard was born on January 17, 1791 in Little Falls, New York to John Pickard and Magdelena "Margaret" Maria Garlock. He was baptized on June 6, 1791 at St. Johnsville Dutch Reformed Church. Peter married first to a woman whose name is unknown and they had one child.

Peter joined the service in the War of 1812 from his home, Lenox, Madison County, New York. Peter was in Martin Lamb's company, Infantry, N.Y. Militia, as a Private., September 12, 1814 at Sackett Harbor, NY. 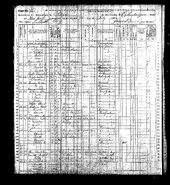