Edit with form
watch 01:36
We're Getting Mutants in the MCU - The Loop
Do you like this video?
Play Sound

Born in Iaşi, Moldavia, to a family of boyars (as the son of Moldavian stolnic), Carp was sent early on to study abroad, completing gymnasium studies in Berlin, and entering (1858) the Law and Political Science branch of the University of Bonn.

In 1862, he returned to Moldavia, which had been united with Wallachia under the rule of Domnitor Alexander John Cuza, and, together with Titu Maiorescu, Vasile Pogor, Theodor Rosetti and Iacob Negruzzi, founded the influential literary society Junimea (first meetings were held in 1863-1864).

Alongside Maiorescu, Carp was the major figure of Junimea for the following decades, although his literary output was relatively minor. He engaged in polemics with representatives of other cultural trends, notably criticising Bogdan Petriceicu-Hasdeu's Romanticist style and political attitudes.

Carp held relatively high administrative offices under the Nicolae Creţulescu Conservative cabinet, and joined the alliance of Conservatives and Liberals against Cuza - leading to the coup d'état of February 22, 1866. He was one of the secretaries of the provisoral governing body immediately after the events, and then served as Romanian diplomatic envoy to Austria-Hungary, the German Empire, and then Italy, during the early years of Carol I as ruler of the country. After the 1877 proclamation of independence from the Ottoman Empire (see Russo–Turkish War, 1877–1878), Carp represented the country as Envoy Extraordinary and Minister Plenipotentiary to Vienna.

In 1891, after the Junimea group split with the Conservatives and deemed itself the Constitutional Party, Carp was elected as the latter's president. His group re-entered the main Conservative group in 1907 (alongside other factions), and he went on to serve as president of the reunited party. Carp subsequently became a noted supporter of Romania's commitment to the Central Powers, and, upon Carol's death in 1914, he advocated Romania's participation in World War I on the German side. This option was ultimately defeated by the pro-Entente Liberals and the general mood of hostility towards Austria-Hungary over the issue of ethnic Romanians in Transylvania.

Petre P. Carp retired from public life and died at his estate in Ţibăneşti, Vaslui County. 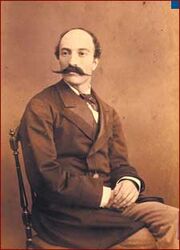