Familypedia
Register
Don't have an account?
Sign In
Advertisement
in: Der Franken (surname), Born in 370, Died in 427,
and 3 more

Pharamond der Franken was born circa 370 to Marcomir V, Duke of the East Franks (351-404) and died after 427 of unspecified causes.

Pharamond or Faramund (c. 365–430) is a legendary early king of the Franks, first referred to in the anonymous 8th century Carolingian text Liber Historiae Francorum, also known as the Gesta regnum Francorum. In this work, which is customarily dated to 727, the anonymous author begins by writing of a mythical Trojan origin for the Franks. The emphasis of the Liber was upon "construct[ing] a specific past for a particular group of people."

The story is told of the election of the first Frankish king. It says that after the death of Sunno, his brother Marcomer, leader of the Ampsivarii and Chatti, proposed to the Franks that they should have one single king, contrary to their tradition. The Liber adds that Pharamond, named as Marcomer's son, was chosen as this first king (thus beginning the tradition of long-haired kings of the Franks), and then states that when he died, his son Chlodio was raised up as the next king. The work says no more of him.

Because there is no reference in any source prior to this work to this figure named Pharamond, who is placed prior to Chlodio (that is, before ca. 428), scholars consider him a legendary rather than historical figure. 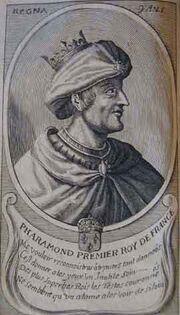