Familypedia
Register
Don't have an account?
Sign In
Advertisement
in: Plzeň, Cities and towns in the Czech Republic, Plzeň-City District

The city is known worldwide for Pilsener beer. Pilsen was in September 2010 selected by an official jury to be put forward to join the Belgian city of Mons as the European capital of culture in 2015.

Plzeň was first mentioned as a castle in 976, as the scene of a battle between Duke Boleslaus II of Bohemia and Emperor Otto II. It became a town in 1295 when King Wenceslaus II granted Plzeň its civic charter as a special "Royal City" and established a new town site, located some 10 km away from the original settlement, which is the current town of Starý Plzenec. It quickly became an important town on trade routes leading to Nuremberg and Regensburg; in the 14th century, it was the third-largest town in Bohemia after Prague and Kutná Hora. During the Hussite Wars, it was the centre of Catholic resistance to the Hussites: Prokop the Great unsuccessfully besieged it three times, and it joined the league of Romanist nobles against King George of Podebrady. In 1468, the town acquired a printing press; the Troyan Chronicle, the first book published in Bohemia, was printed on it.

Emperor Rudolf II made Plzeň his seat from 1599–1600. During the Thirty Years' War the town was taken by Mansfeld in 1618 after the Siege of Plzeň and it was not recaptured by the Imperial troops until 1621. Wallenstein made it his winter quarters in 1633. The town was unsuccessfully besieged by the Swedes in 1637 and 1648. The town and region have been staunchly Catholic despite the Hussite Wars.

At the end of the 17th century, the architecture of Plzeň began to be influenced by the Baroque style. The city center has been under cultural heritage preservation since 1989.

In the second half of the 19th Century Plzeň, already an important trade centre for Bohemia, near the Bavarian/German border, began to rapidly industrialise. In 1869 Emil Škoda started up the Škoda Works, which became the most important and influential engineering company in the country and a crucial supplier of arms to the Austro-Hungarian Army. By 1917 the Škoda Works employed over 30,000 workers. The second largest employer in this period was, after 1898, the National Railways train workshop with about 2,000 employees: this was the largest rail repair shop in all Austria-Hungary. Between 1861 and 1877, the Plzeň railway junction was completed and in 1899 the first tram line started in the city. This burst of industry had two important effects: the growth of the local Czech (Slavic) population and the urban poor. Before 1860 the town was mostly German-speaking; after 1918 it was mostly Czech speaking. However much of the countryside to the west, north and south of the town continued to speak a local German dialect.

Following Czechoslovak independence from Austria-Hungary in 1918 the German-speaking minority in the region hoped to be united with Austria and were unhappy at being included in Czechoslovakia. Many allied themselves to the Nazi cause after 1933, in hopes that perhaps Adolf Hitler might be able to unite them with their German-speaking neighbours. In 1938 Plzeň became literally a frontier town, after the creation of the Sudetenland moved the Third Reich borders to the city's outer limits. During the Nazi occupation from 1939 to 1945 the Škoda Works in Pilsen was forced to provide armaments for the Wehrmacht and Czech contributions, particularly in the field of tanks, were noted.

The German-speaking population was forcibly expelled from the city and in fact all of Czechoslovakia after the end of war in 1945, according to provision in the Potsdam agreement. All of their property was confiscated.

On 6 May 1945, near end of World War II, Plzeň was liberated from Nazi Germany by the 16th Armored Division of General Patton's 3rd Army. Also participating in the liberation of the city were elements of the 97th and 2nd Infantry Divisions. Other Third Army units liberated major portions of Western Bohemia. The rest of Czechoslovakia was liberated from German control by the Soviet Red Army. Elements of Third Army, as well as units from the First Army, remained in Plzeň until late November 1945, assisting the Czechs with re-building from the war. After seizing power in 1948, the Communists undertook a systematic campaign to suppress all acknowledgement of the U.S. Army's role in liberating the city and Western Bohemia. This continued until 1989 when the Communists were removed from power. Since 1990, the city of Plzeň has organized the annual Liberation Festival, taking place in May, which has already become a local tradition, and has been attended by many American and Allied veterans.

After the Communist takeover of February 1948, the totalitarian, Soviet-oriented Czechoslovak government launched a currency reform in 1953. This decision caused a wave of discontent throughout the society, while the events in Plzeň were more intense. On 1 June 1953 over 20,000 people, mainly workers of the Škoda Works began demonstrating against the communist regime. Demonstrators forced their way into the town hall and threw Communist symbols, furniture and other objects out the windows. The demonstration was violently suppressed by the Communist officials.

The officials of Plzeň founded a city-owned brewery in 1839, Bürger Brauerei (Citizens' Brewery – now Plzeňský Prazdroj),[2] and recruited Bavarian brewer Josef Groll (1813–1887) who produced the first batch of modern pilsener beer on 5 October 1842. The combination of pale colour from the new malts, Pilsen's remarkably soft water, Saaz noble hops from nearby Žatec (Saaz in German) and Bavarian-style lagering produced a clear, golden beer which was regarded as a sensation.

Improving transport meant that this new beer was soon available throughout Central Europe and Pilsner Brauart-style brewing was widely imitated. In 1859, “Pilsner Bier” was registered as a brand name at the Chamber of Commerce and Trade in Plzeň. In 1898, the Pilsner Urquell trade mark was created to put emphasis on it being the original brewery.

Plzeň is a centre of academic, business, and cultural life for the western part of the Czech Republic. The University of West Bohemia in Plzeň is well known for its School of Law, School of Mechanical Engineering and School of Applied Science in particular.

Since the second half of the 1990s the city has experienced high growth in foreign investments. In 2007, Israeli mall developer Plaza Centers opened the Pilsen Plaza, a 20,000 square meter shopping mall and entertainment center featuring a multiplex cinema from Cinema City Czech Republic.

Plzeň produces approximately two-thirds of the Plzeň Region GDP, even though it contains only 29.8% of its population.[3] Based on these figures, the city of Plzeň has a total GDP of approximately $7.2 billion, and a per-capita GDP of $44,000. While part of this is explained by commuters (people who work in the city, but live elsewhere) it is one of the most prosperous cities in the Czech Republic.

The Škoda company, established in Plzeň in 1859, has been an important part of Austro-Hungarian, Czechoslovak and Czech engineering. The company's production had been directed to the needs of the Eastern Bloc, and after the Velvet Revolution, it consequently ran into selling problems and debts. After a huge restructuring process it has just two principal subsidiaries: Škoda Transportation (locomotives, tube-trains or trams, since sold to Portland, Tacoma, Seattle and Sardinia) and Škoda Power (turbines).

Many foreign companies now own manufacturing bases in Plzeň including Daikin and Panasonic. There has been much discussion of redeveloping those large areas of the Škoda plant which the company no longer uses.

Plzeň also has the biggest distillery (Stock) in the Czech Republic.

Plzeň enjoys cool and temperate Oceanic climate (Cfb) with mostly balanced temperatures year round. Plzeň is a wet city with precipitation over 1mm occurring every second day and the number of days with thunderstorms is 19. Thanks to that it receives on average only 1667 hours of sunshine. Precipitation falls evenly during the year. Due to terrain features, strong winds are rare. Winters are chilly but milder than in adjacent areas. Snow cover is erratic and stays on the ground for 51 days. Though an average year has 113 days with temperatures below zero, the number of days with frost below −15 °C is only 5. Extreme low temperatures with days below −5 °C and nights below −10 °C are rare but sometimes occur during a northeast arctic wave. The lowest possible temperatures are about −20 °C. During Winter daylight lasts only for about 9 hours a day and is murky with frequent haze. Spring is short and brings longer days and an increasing number of sunny days. May and June are months of blooming vegetation and greenness. Summer lasts from the end of May until first third of September. During that period Plzeň enjoys changeable weather which can be warm to hot. Temperatures are always above 5 degrees Celsius with nights between 10–18 °C and days between 18–28 °C. Days are bright and up to 16 hours long. Plzeň can also be hot, especially during heat waves originating in the southern Mediterranean. The number of hot days above 30 °C is steadily growing with 5 months (May – September) of possible 30+ °C days. If hot weather does occur, it's common that it turns after a few weeks into cold and rainy weather with incoming Atlantic-based fronts. Nights can be unpleasantly cold even during summers with high humidity levels and winter lows are below zero since the second half of November to the end of March. The only natural hazards are infrequent drought with extreme high temperatures above 33 °C and prolonged heavy rains causing floods.

The most prominent sights of Plzeň are the Gothic St. Bartholomew's Cathedral, founded in the late 13th century, the tower of which (102.26 m / 335 ft) is the highest in the Czech Republic, the Renaissance Town Hall, and the Moorish Revival Great Synagogue, the second largest synagogue in Europe, after the Dohány Street Synagogue in Budapest. There is also a 20 km historic underground tunnel/cellar network, among the longest in Central Europe. Part of this network is open to the public for tours of approximately 750 metres in length and up to a depth of 12 metres.

Plzeň is also well-known for the Pilsner Urquell (since 1842) and Gambrinus (since 1869) breweries, currently owned by South African Breweries. A popular tourist attraction is the Plzeňský Prazdroj brewery tour where visitors can discover the history of beer. The pilsener style of beer was developed in Plzeň in the 19th century.

Plzeň has been selected to be a European Capital Of Culture in 2015, along with Mons, Belgium.

Since 31 May 1993 Plzeň has been the seat of the Catholic Diocese of Plzeň. The first and incumbent Bishop is František Radkovský. The diocese covers almost the entire territory of Plzeň region with a total of 818,700 inhabitants. The Diocese office is in St. Bartholomew's Cathedral on the Republic Square in Plzeň. The diocese is divided into 10 vicariates with a total of 72 parishes.

Two trams T3 were modernized into one tram type K3R-NT

One of Škoda's prototype trams was tested on the tram network in Plzeň. 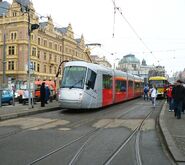 Another prototype of Škoda's tram 14T for Prague was tested in Plzeň.

The Plzeň metropolitan area is largely served by a network of trams, trolleybuses and buses operated by the PMDP. Like other continental European cities, tickets bought from vending machines or small shops are valid for any transportation ran by the city of Plzeň. For residents of the city, a Plzeň Card can be purchased and through a system of "topping up" be used on any public transport with no limitations, as long as it is paid up and valid.

Plzeň is twinned with the following cities: