Pottawattamie County ( /ˌpɑːtəˈwɑːtəmiː/) is a county located in the U.S. state of Iowa. At the 2020 census, the population was 93,667,[1] making it the tenth-most populous county in Iowa. The county takes its name from the Potawatomi Native American tribe. The county seat is Council Bluffs.[2][3] 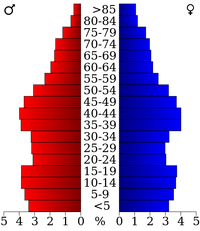 The population ranking of the following table is based on the 2020 census of Pottawattamie County.[1]

Pottawattamie County is a strongly Republican county. The county last backed a Democratic presidential candidate in 1964 as the party won nationally by a landslide, & only voted Democratic in four other elections prior to that. Some recent elections were more competitive, with Barack Obama losing the county in 2008 by less than 1,000 votes. However, Donald Trump won the county by 21% in 2016 and by 17% in 2020.