Familypedia
Register
Don't have an account?
Sign In
Advertisement
in: Huntington (surname), Born in 1810, Died in 1892,
and 2 more

History - Presendia Huntington Buell and her husband Norman, joined the church in 1836 in Kirtland, OH and subsequently journeyed with Joseph Smith's wagon company to Missouri and then later to Illinois.

Presendia's biographer, Emmeline B. Wells wrote, that in the fall of 1841, "Joseph himself taught the principle of plural marriage to Sister Presendia...She knew Joseph Smith to be a man of God...and consequently...she accepted the sealing ordinance with Joseph as a sacred and holy confirmation."

Presendia married Joseph Smith on December 11, 1841 (wife #6). Joseph had married her sister, Zina two months prior. As with Zina, Presendia's brother, Dimick, performed the ceremony. Another brother, Oliver wrote, "Dimick had given our sisters Zina & Presendia to Joseph as wives." In return, Joseph offered him any reward he wanted. Alluding to eternal salvation, Dimick replied, "that where you and your fathers family are, there I and my fathers family may also be." Presendia continued to live with her first Husband, Norman. In November 1843, she bore her seventh child, John Hiram, but he passed away a year later. Only two of Presendia's children had survived.

After Joseph Smith's death in summer 1844, Presendia married Heber C. Kimball. She continued to live with her first husband, Norman, until May 1846. Her brother Oliver wrote, "Presendia's Husband would not follow the Church any longer...so she left him and followed after her Lord [Kimball]" Presendia took her six year old son, Oliver, with her, leaving behind her 16 year old son George and husband, Norman. Of the experience, Presendia wrote, "No tongue can tell my feelings in those days of trial; but I had considered well, and felt I would rather suffer and die with the saints, than live in Babylon."

Norman tried unsuccessfully to find Presendia in her flight. By 1848 he located her at Winter Quarters, Nebraska, living with other Mormons migrating to the Salt Lake Valley. Presendia's brother Oliver wrote, "Norman Buell...had been up to Winter Quarters on a visit...and wanted she should not marry but wait a while and he would come over to the valley, and be glad to live with her again". Norman was apparently unaware of Presendia's marriage to Kimball, and his offer to accompany her to Utah was refused. Presendia later bore two children by husband Heber.

She married on 4 February 1846 and had 2 children, Heber married four grandchildren of Lathrop-Pitkin Family. 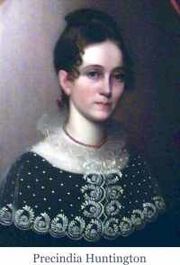