Familypedia
Register
Don't have an account?
Sign In
Advertisement
in: Provinces of Belgium, Subdivisions of Belgium, Lists of country subdivisions,
and 2 more 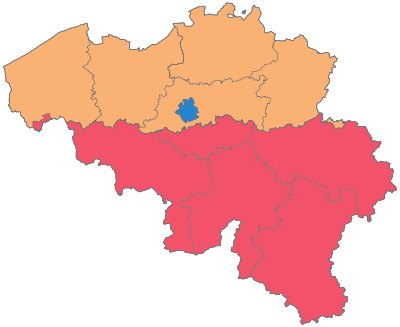 The division into provinces is fixed by Article 5 of the Belgian Constitution. The provinces are further subdivided into (administrative) arrondissements.

At the time of the independence of Belgium from the Netherlands in 1830, its territory simply consisted of the existing nine Belgian provinces. The first article of the Belgian Constitution said: "Belgium is divided into provinces. These provinces are Antwerp, Brabant, West Flanders, East Flanders, Hainaut, Liège, Limburg, Luxembourg, Namur, except for the relations of Luxembourg with the German Confederation."

In 1920, following the First World War, the Eupen-Malmedy territory was annexed to Belgium and became part of the province of Liège.

During the second half of the 20th century, Belgium was transformed from a unitary state to a federal state with three Communities and three Regions. As part of the state reforms, the (bilingual) province of Brabant was split in 1995 into two (unilingual) provinces, Flemish Brabant and Walloon Brabant, and the (bilingual) Brussels-Capital Region. The Brussels-Capital Region does not belong to any province, is not a province, and does not contain any. The two provinces became part of the Flemish Region and the Walloon Region respectively. The remaining eight provinces became part of these regions as well, so

In Flemish Brabant, there is also a Deputy Governor (Dutch: Adjunct van de gouverneur). The Deputy Governor is appointed by the Flemish Government on the unanimous advice of the Federal Council of Ministers and must have a considerable knowledge of both the Dutch and the French language. He is responsible for ensuring that the language legislation is observed in the municipalities in the Brussels Periphery.

Following the Fifth State Reform, the responsibility for the provincial institutions was devolved to the Regions. The Regions have the power to amend or replace the existing legislation on the provincial institutions, most notably the Provincial Law of 30 April 1836. In the Flemish Region, the Provincial Decree of 9 December 2005 applies. In the Walloon Region, the Code of Local Democracy and Decentralisation applies. The legal framework in these Regions is still very similar, but that could change in the future. Although the Regions are responsible for the provincial institutions, the Federal State has retained its responsibility over the provinces in certain cases. For instance, the Regions are responsible for the appointment of the Provincial Governors, but only after the unanimous advice of the Federal Council of Ministers. Legislation regarding the Governor and Vice-Governor of Brussels-Capital, and the Deputy Governor of Flemish Brabant, has also remained a federal competency.

Absence of any province in the Brussels-Capital Region[]

Within this region, nearly all former provincial competencies are assumed by its regional institutions and by the French Community Commission, the Flemish Community Commission or the Common Community Commission. However, the Arrondissement of Brussels-Capital has two commissioners of the Federal Government who are called 'Governor of the Brussels-Capital Region' and 'Vice-Governor'. The Governor exercises most of the few remaining powers elsewhere exercised by a provincial governor, particularly in the field of public order, as far as no (federal) law, (regional) decree, ordinance or decision states otherwise.[4]

The Governor is appointed by the cabinet of the Brussels-Capital Region on the unanimous advice of the Federal Council of Ministers. The regional government also appoints the Vice-Governor, who must have a considerable knowledge of both the French and the Dutch language and who must ensure that the legislation regarding the use of languages is observed in Brussels.[5]

Wikimedia Commons has media related to:
Provinces of Belgium
Community content is available under CC-BY-SA unless otherwise noted.
Advertisement