Familypedia
Register
Don't have an account?
Sign In
Advertisement
in: Cities in Romania, Settlements in Suceava County, Bukovina-German people, Rădăuți

Rădăuți (German: Radautz; Hungarian: Radóc; Polish: Radowce; Ukrainian: Радівці|, Radivtsi; Yiddish: ראַדעװיץ Radevits) is a city in Suceava County, north-eastern Romania. It is situated in the historical region of Bukovina. Rădăuți is the third largest urban settlement in the county, with a population of 22,145 inhabitants, according to the 2011 census. It was declared a municipality in 1995, along with two other cities in Suceava County: Fălticeni and Câmpulung Moldovenesc. Rădăuţi covers an area of 32,30 km² and it was the capital of former Rădăuţi County (until 1950).

Rădăuți is situated in Bukovina, northern Moldavia, on a plain between the Suceava and Suceviţa rivers, 37 km (23 mi) north-west from Suceava, the county capital. The city is located in the depression with the same name, at 375 metres (410 yards) altitude. It is one of the oldest settlements in Moldavia, known since the 15th century. The towns of Siret, Solca, Milișăuți and Vicovu de Sus are located relatively close to the city, in the Rădăuți urban area of influence.

Rădăuţi reached its peak population in 1992, when more than 31,000 people were living within the city limits.

Rădăuţi is the third most populated urban settlement in Suceava County, after the county capital, Suceava, and Fălticeni.

The mention of "Radomir's village" (as part of a review of boyar property in the area) in a 1392 document (uric) is generally believed to be the town's first mention, and indication of the origin of the name Rădăuți (other theories state that the settlement had its origins in earlier periods, and that the name is a Slavic-influenced derivative of the Latin word Rottacenum, as allegedly used by soldiers in the Roman garrison in Siret). The oldest mention of Rădăuți as such dates from 1413, in a document issued by Moldavian Prince Alexandru cel Bun.

By the middle of the 14th century, Rădăuți was already a flourishing settlement, the seat of a prominent Eastern Orthodox church during the times of Bogdan I (1359-1365), and subsequently a bishopric. Around the St. Nicholas church (Bogdana Monastery), archaeologists have uncovered a habitation layer preceding Bogdan's period of rule, one which could point to the existence of a local center prior to the formation of the Moldova state.

Awarded the privilege of organizing fairs, Rădăuți evolved due to its favorable location midway between the Carpathians and the tableland area (with traders from both regions establishing contact in the local market). The fairs at Rădăuți have been dated to the time of Stephen the Great (a document from 1481; however, since the mention includes details of Stephen's intervention in solving a commercial dispute, it is possible that the fairs were well established by then).

Rădăuți was one of the largest cities of the Duchy of Bukovina during the period of Habsburg administration (1775-1918). During that time it saw a high level of German (especially Swabian) immigration.

Main article: History of the Jews in Romania

A Jewish community was present before the Habsburg takeover, and is attested to have been overseen by a starost.

Many Jews fleeing the Kingdom of Galicia and Lodomeria (as well as other Habsburg areas) from intense persecution and anti-Semitism during the Middle Ages settled in Rădăuţi. The community was allowed a degree of self-administration, and witnessed a period of prosperity and cultural effervescence during the 19th century.

The majority of Rădăuţi's Jewish population was exterminated during the Holocaust. Persecutions became widespread around 1938, when Jews were harassed and attacked by authorities under the Octavian Goga government; they were confirmed by anti-Semitic legislation passed by the Ion Gigurtu cabinet, and, in late 1940, exceptionally violent following the establishment of the National Legionary State. In October 1941, all Jews present in Rădăuţi (more than 10,000) were deported to concentration camps in Transnistria.[2]

Zonning.jpg
Map of the city 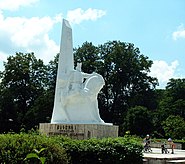 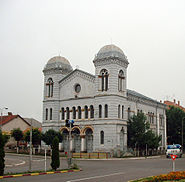