Familypedia
Register
Don't have an account?
Sign In
Advertisement
in: Dudescu (surname), Born in 1859, Died in 1983,
and 6 more

Radu Dudescu attended the Matei Basarab High School of Bucharest from 1905 to 1913 and thereafter enrolled in the School of Architecture of Bucharest (now Ion Mincu University of Architecture and Urbanism), graduating in 1921. While still in university he had several jobs as draftsman for the Commission for the rehabilitation of the area destroyed by World War I in 1918-1919 and thereafter for the Ministry of Public Works in 1919-1921.

After graduation he first worked for the Romanian Railway Society from 1921-1922, and afterward was hired by the National Bank of Romania where he worked for 27 years, being chief of the Architecture Service of the Bank. From 1935 to 1940 he also was president of the Sport and Cultural Association of the National Bank of Romania. In 1948 he was promoted Deputy Director of the Adminstrative Division of the Bank. On March 2, 1950 Radu Dudescu was transferred to the Design Institute for Constructions subordinated to the Ministry of Constructions.

One of the first important buildings he designed is the Luminiş Villa (now George Enescu Memorial House), located in the Cumpătu district, on the right bank of Prahova River the only suburb of Sinaia, Romania. It was owned by the Romanian composer and musician George Enescu (1881-1955). The villa was built between 1923 and 1926 and is an example of Neo-Brâncovenesc style.[1] [2]

The most important building designed by Radu Dudescu is the new building of the National Bank of Romania, located on Strada Doamnei in Bucharest [3] [4]

Another the notable buildings designed by Radu Dudescu is the Zodiac building, an apartment high-rise located on Strada Dorobanţi in Bucharest. The building was designed in cooperation with architect Mircea Marinescu and was constructed by Emil Prager, with decorative panels designed by Constantin Baraschi. The building has been included in the list of historical monuments of Bucharest. [6] [7][8]

Buildings for the Romanian Railways

Buildings for the Romanian National Bank 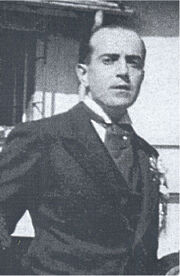