He first married Lois Anne Anastasio (1934-2018) and had five children. He then had a child with Patricia Clifford, and then married Karen Anne Kramer. 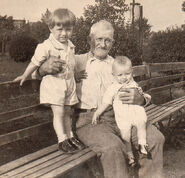 1947 at the home of Bertha Griffin in Westbrookville