Familypedia
Register
Don't have an account?
Sign In
Advertisement
in: Harley (surname), Born in 1579, Died in 1656,
and 18 more

Sir Robert owned Wigmore Castle in Herefordshire from 1601 to 1643. He purchased the castle from Queen Elizabeth I. Sir Robert was Master of the Mint

in England under King Charles I of England. Sir Robert received a knighthood

Robert married Anne Barret about 1604 in Belhouse, in Aveley, Essex, England. He was elected as the local Member of Parliament for Radnor Boroughs

Sir Richard was a staunch supporter of the Parliamentarians throughout his life in the civil war. When their castle was threatened by Royalist forces, with insufficient forces to defend it, his wife, Brilliana, dismantled what defences remained to stop the Royalists from using the castle against the Parliamentarians 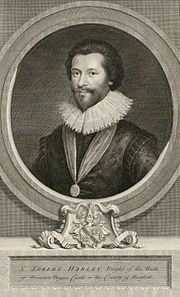