Familypedia
Register
Don't have an account?
Sign In
Advertisement
in: Of Normandy (surname), Born in 1000, Died in 1035,
and 4 more

Robert I of Normandy

Robert, called "The Magnificent" (French, "le Magnifique") for his love of finery, and also called "The Devil" was the son of Duke Richard II of Normandy and Judith, daughter of Conan I, Duke of Brittany.

When his father died, his elder brother Richard succeeded, whilst he became Count of Hiémois. When Richard died a year later, there were great suspicions that Robert had Richard murdered, hence his other nickname, "Robert le diable" (the devil). He is sometimes identified with the legendary Robert the Devil. Robert aided King Henry I of France against Henry's rebellious brother and mother, and for his help he was given the territory of the Vexin. He also intervened in the affairs of Flanders, supported Edward the Confessor, who was then in exile at Robert's court, and sponsored monastic reform in Normandy. 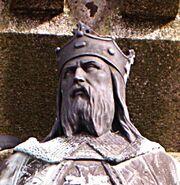