Familypedia
Register
Don't have an account?
Sign In
Advertisement
in: Baldwin (surname), Born in 1793, Died in 1863,
and 14 more

Roger Sherman Baldwin was an American politician and lawyer

Baldwin was son of Simeon Baldwin and Rebecca Sherman in New Haven, Connecticut. He was the maternal grandson of notable founding father Roger Sherman (the only person to sign all four great state papers of the U.S.: the Continental Association, the Declaration of Independence, the Articles of Confederation and the Constitution[1]). He attended Hopkins School, and entered Yale College at the age of fourteen, and graduated with high honors in 1811. At Yale, Baldwin was a member of the Linonian Society. After leaving Yale he studied law in his father's office in New Haven, and also in the Litchfield Law School, and was admitted to the bar in 1814. Although repeatedly called into public office, he devoted himself through life to the profession of his choice, attaining the highest distinction, especially in the discussion of questions of law. His defense in 1841, of the rights of the Africans of the Amistad, is particularly celebrated, both for his ability and for the importance of the case. 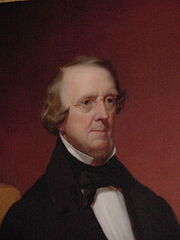