Familypedia
Register
Don't have an account?
Sign In
Advertisement
in: Reagan (surname), Born in 1911, Died in 2004,
and 72 more

Actor, Governor of California, President of the United States

For a detailed biography, see the biography tab. 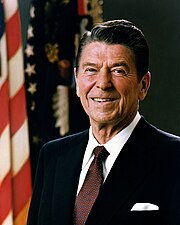