Rose Bay is a harbourside, eastern suburb of Sydney, in the state of New South Wales, Australia. Rose Bay is located 7 kilometres east of the Sydney central business district, in the local government areas of Waverley Municipal Council (east of Old South Head Road) and Woollahra Council (on its western side towards the bay).

Rose Bay was named after The Right Honourable George Rose, who was joint Secretary to the British Treasury with Thomas Steele, after whom Steel(e) Point at Nielsen Park was named. The name Rose Bay was used as early as 1788 by Captain John Hunter.[1]

HMAS Tingira, named after an Aboriginal word for 'open sea' was moored in Rose Bay from 1912 to 1927. It was used to train over 3,000 Australian sailors, many for service in World War 1. There is a small park on the Rose Bay waterfront which commemorates Tingira.[2]

From 1938, seaplanes landed in Sydney Harbour on Rose Bay, making this Sydney's first international airport. On 14 September 1945, nine Catalina flying boats landed and moored at the Rose Bay wharf, repatriating Australian POWs, survivors of Japanese camps. Sydneysiders looked on in silence, aghast at the emaciated state of the returning soldiers.[3] There is a nearby restaurant called Catalina, referencing the aircraft of the same name.

The Wintergarden Cinema was a landmark building which housed the Sydney Film Festival from 1968 to 1973, but which was demolished to make way for exclusive apartments in the late 1980s.[4]

Rose Bay Cottage, located in Salisbury Road, was built in 1834 by the important colonial architect, John Verge, for James Holt who, at the time, managed the 'Cooper Estate'. When built, it was the only house on the 'Estate', with the possible exception of Henrietta Villa, Captain Piper's previous home on Point Piper. The house was built as a single storey verandahed residence of about 225 m². over a similar sized stone cellar. Adjacent to it was an earlier structure (circa 1820's) which was apparently adopted as a kitchen. The house was significantly enlarged by sympathetic additions between 1837 and 1850 and the kitchen wing was joined to the main house forming a courtyard. By the end of this period the house had more than doubled in size. From 1861 until 1911, the house was usually known as Rose Bay Lodge; it has also been known as Salisbury Court. It was surrounded by extensive gardens embellished by five working fountains fed from a water source above on the slopes of Bellevue Hill which later fed 'Woollahra House', built in 1883 on Point Piper. One of the fountains still remains. Prominent occupiers of the house included Sir Daniel Cooper (his son Daniel was born there in 1848), Walter Lamb (1825-1906) and Sir John Hay (1816-1892) - they were all noted businessmen and parliamentarians. In 1911, the property, then of 4 acres (1.6 ha), was sub-divided and surrounded by other houses. During the next fifty years the old house suffered extensive unsympathetic additions including a second story over the original Verge cottage which converted the house to twelve flats. It has subsequently been restored according to strict conservation standards and the unsympathetic additions removed. The house is listed on the Heritage Register of New South Wales.[5]

Fernleigh Castle was built in 1892,[6] incorporating part of a sandstone cottage that dated back to 1874. Aptly named, it resembles a castle with its turrets, castellated towers and square Norman tower. Its sandstone structure contains thirty rooms and a number of stained-glass windows. Fernleigh Castle is on the Register of the National Estate.[7]

This police station originally started life as the gatekeeper's lodge in the estate of 'Woollahra House', a nineteenth-century mansion that has long gone.[8] The surviving building was designed in a Victorian Classical Revival style which is attributed to 'Hilly and Mansfield' and which probably tells us what Woollahra House looked like. It was built in 1871 and features rendered walls punctuated with pilasters. Sympathetically restored, it is now on the Register of the National Estate.[9]

Rose Bay is home to two independent schools: Kambala Girls School (1887), an Anglican, day and boarding school for girls from Pre-school to Year 12; and Kincoppal - Rose Bay (1882), a Catholic, day and boarding school with a co-educational primary school and girls-only high school. Kincoppal - Rose Bay was originally Rose Bay Convent but amalgamated with Kincoppal Elizabeth Bay in the late 1970s to become "Kincoppal - Rose Bay School of the Sacred Heart". The prep school campus of Cranbrook School (1918) is also located in the suburb.[10] McAuley Primary School is a Catholic school for Kindergarten to Year 6. It was opened in 1967 on the site that had been a Christian Brothers High School from 1935 to 1966.[11]

Public schools in the suburb are Rose Bay Secondary College (2004) and Rose Bay Public School (1891). Rose Bay Secondary College was formed by the amalgamation of Vaucluse High School and Dover Heights High School. Originally these schools were known as Vaucluse Boys High, Dover Heights Boys High and Dover Heights Girls High. The cost of improving the public school facilities at Rose Bay was linked to the sale of the campus at Vaucluse. Despite a surge in enrolments and an unmet demand for public high school places in the area, the Vaucluse campus was sold in February 2007 by the Government of New South Wales for $30M to become a seniors community development site.[12]

Convent of the Sacred Heart[]

The Convent of the Sacred Heart overlooks the bay and can be seen from many vantage points around Sydney Harbour. The site was originally occupied by a house called Claremont, which was built in 1852. The convent incorporated this house when it was built in 1888. Designed by John Horbury Hunt, the new building was of five storeys in height and made of sandstone that was quarried at the site. It included a Gothic Revival Chapel and is regarded as one of Hunt's most successful creations. It now houses the Kincoppal-Rose Bay school for girls. 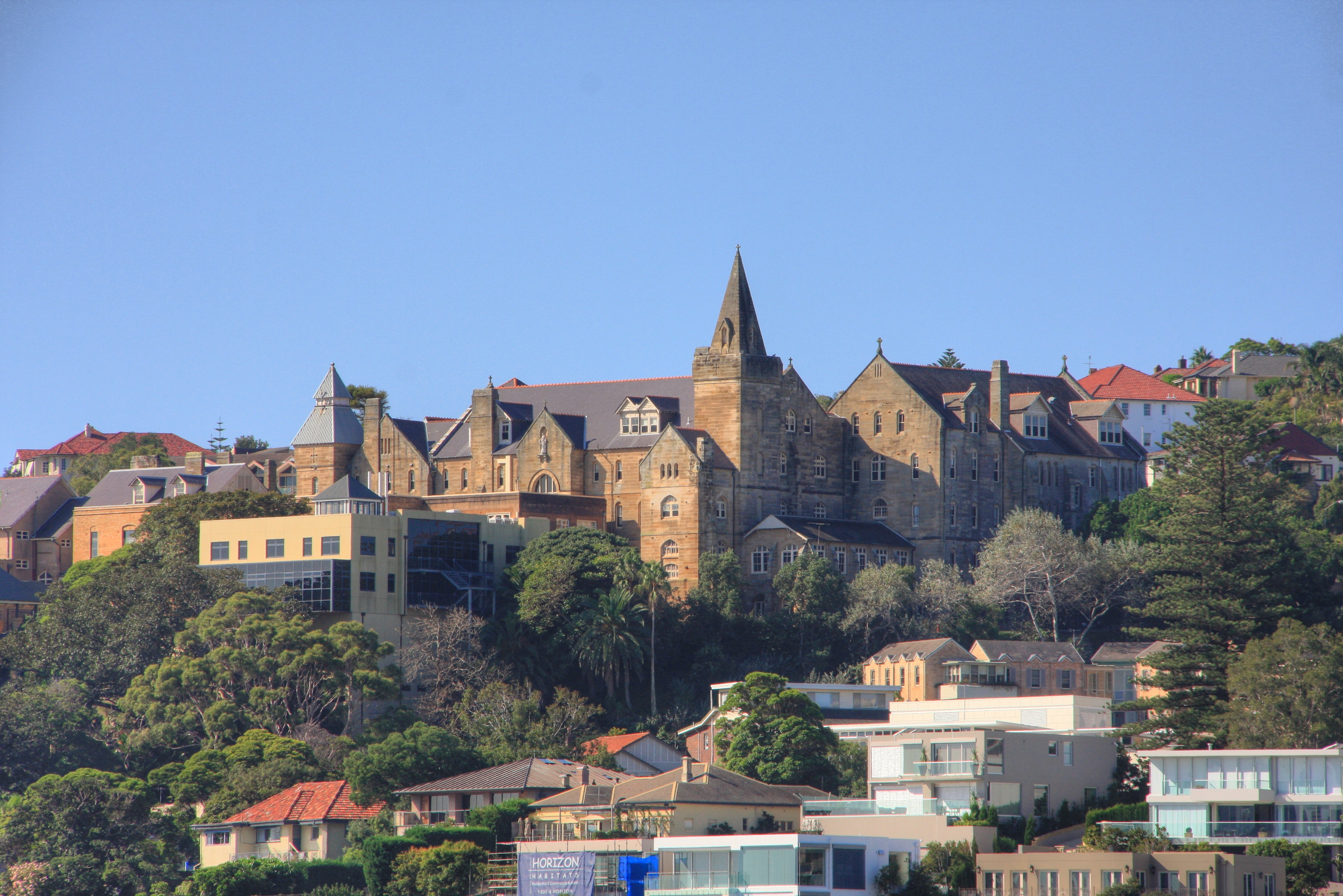 The Rose Bay ferry wharf provides access to the Eastern Suburbs ferry services. There are frequent buses to and from the centre of Sydney via Kings Cross as well as other points and out to Watsons Bay and the coast. Seaplane operators offer scenic flights over Sydney itself as well as a number of excursions along the coast as well as some scheduled services to Newcastle with aircraft operating out of the seaplane terminal near Rose Bay ferry terminal.

There are two golf courses located in Rose Bay. Woollahra Golf Club is a public 9-hole course and Royal Sydney Golf Club is a private 27-hole championship course, not open to the public. Rose Bay also has a very active Rovers (Australia) known as 3rd Rose Bay Rovers. The hall is located in Vickery Avenue, opposite Whoollahra Sailing Club.

Religion Rose Bay has been the centre of Sydney's well-established Jewish community, which has now spread all over the Eastern Suburbs. It is still a strong centre for the Jewish population of Sydney, and has attracted a sizeable number of immigrants from Israel, South Africa and Russia.