Familypedia
Register
Don't have an account?
Sign In
Advertisement
in: Established in 862, Settlements in Rostov Rayon (Yaroslavl Oblast), Historical cities and towns in Russia

Rostov (Russian: Росто́в; Old Norse: Rostofa) is one of the oldest towns in Russia and a tourist centre of the Golden Ring. It is located on the shores of Lake Nero in Rostov Rayon, Yaroslavl Oblast, 202 km to the north east of Moscow. The city's population in 2010 was 32,318.

While the official name of the town is Rostov, it is better known to Russians as Rostov Veliky, i.e. Rostov the Great. This name is used to distinguish it from Rostov on Don. Rostov Yaroslavsky is the official name of its railway station (due to its position in Yaroslavl Oblast); the town itself is hardly ever called by that name.

Rostov was predated by Sarskoye Gorodishche, which some scholars interpret as the capital of the Merya tribe, while others believe it was an important Viking trade enclave and fortress guarding the Volga trade route. First mentioned in the year 862 as an already important settlement, by the 13th century, Rostov became capital city of one of the most prominent Russian principalities. It was incorporated into the Grand Principality of Moscow in 1474.

Even after it lost its independence, Rostov was still an ecclesiastic center of utmost importance (from 988 it was the see of one of the first Russian bishoprics). In the 14th Century, the bishops of Rostov became archbishops, and late in the 16th century, metropolitans. One of those metropolitans, Iona (Jonah) Sysoevich (ca. 1607-1690), commissioned the town's main landmark: the kremlin that many regard as the finest outside of Moscow.

Ravaged by the Mongols in the 13th and 14th centuries (last sack by Edigu in 1408) and the Poles in 1608, Rostov is now a medium size town. The metropolitan see was transferred to Yaroslavl late in the 18th century.

Apart from its history, Rostov is renowned for its enamels.

The central square of Rostov is occupied by the enormous Assumption Cathedral. It is unknown when the present building was erected, the mid-16th Century being the most likely date. Lower parts of the cathedral walls are dated to the 12th century. The ponderous bell-tower was constructed mostly in the 17th century. Its bells are among the largest and most famous in Russia; each has its own name. The largest bell, cast in 1688, weighs 32000 kilograms. It is named Sysoi to honour the metropolitan's father.

An area situated between the cathedral square and the lake was chosen by Iona Sysoevich as a place for his fairy-tale residence. All the construction works were carried out between 1667 and 1694. Major buildings include the ornate Savior Church-na-Senyakh (1675), the sombre Church of St. Gregory (1670), and the barbican churches of St. John the Apostle (1683) and of the Resurrection of Christ (1670). The residence, often erroneously called kremlin, also includes eleven ornate tower bells, numerous palaces, several small belfries, and the dimunitive baroque Church of Our Lady of Smolensk (1693). All the churches are elaborately painted and decorated.

The cathedral and four tall kremlin churches with their silver "blind" domes were imitated throughout the city. This tendency is particularly evident in the Savior-on-the-Market church and the cathedral church of the Nativity convent, both dating from the 17th century and situated near the kremlin walls. The oldest church within the city centre was consecrated to St. Isidore the Blessed in 1565. They say that Ivan the Terrible had the architect executed, because his church was so much smaller than its predecessor.

The kremlin is flanked by two great monasteries, both facing the Lake Nero. To the right from the Kremlin stands the Abraham monastery, founded in the 11th Century and one of the oldest in Russia. Its cathedral, commissioned by Ivan the Terrible in 1553 to commemorate the conquest of Kazan, inspired numerous churches in the region, particularly in Yaroslavl.

Spaso-Yakovlevsky Monastery, situated to the left from the kremlin on the town's outskirts, has been venerated as the shrine of St. Dmitry of Rostov. Most of the monastery structures were built in the late 18th and early 19th centuries in the fine neoclassical style. There are also two 17th-Century churches: the Conception of St. Anna, and the Transfiguration of Our Saviour. Unlike most other churches in the town, the monastery belongs to the Russian Orthodoxy and houses a theological seminary. 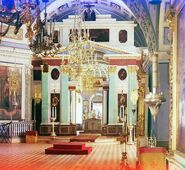 Neoclassical interior of the Yakovlevsky monastery (1913)

Monastery of Saints Boris and Gleb near Rostov (1923)

The citadel of Rostov seen from Lake Nero 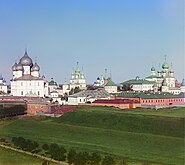 The courtyard in the kremlin

The vicinity of Rostov is rich in old architecture. For example, an old wooden church (1687–89) may be seen in the village of Ishnia. One of the best preserved monasteries in Russia, that of saints Boris and Gleb, is situated in Borisoglebsky, about 20 km west of the town. The monastery was favoured by Ivan the Terrible, who personally supervised the construction of towered walls and bell-tower around an even more ancient cathedral. The only addition made to the monastery after Ivan's death is a superb barbican church, commissioned by the metropolitan Iona Sysoevich.