Familypedia
Register
Don't have an account?
Sign In
Advertisement
in: Pages with broken file links, Rueil-Malmaison, Communes of Hauts-de-Seine

Rueil-Malmaison (French pronunciation: [ʁɥɛj malmɛzɔ̃]) is a commune in the western suburbs of Paris, in the Hauts-de-Seine department of the Île-de-France region. It is located 12.6 kilometres (8 miles) from the centre of Paris. In 2017, it had a population of 78,152. It is one of the wealthiest suburbs of Paris.

Rueil-Malmaison was originally called simply Rueil. In medieval times the name Rueil was spelled either Roialum, Riogilum, Rotoialum, Ruolium, or Ruellium. This name is made of the Celtic word ialo (meaning 'clearing, glade' or 'place of') suffixed to a radical meaning 'brook, stream' (Latin: rivus, Template:Lang-fro), or maybe to a radical meaning 'ford' (Celtic ritu).

In 1928, the name of the commune officially became Rueil-Malmaison in reference to its most famous tourist attraction, the Château de Malmaison, home of Napoleon's first wife Joséphine de Beauharnais.

The name Malmaison comes from Medieval Latin mala mansio, meaning 'ill-fated domain', 'estate of ill luck'. In the Early Middle Ages Malmaison was the site of a royal residence which was destroyed by the Vikings in 846.

Rueil is famous for the Château de Malmaison where Napoleon and his first wife Joséphine de Beauharnais lived. Upon her death in 1814, she was buried at the nearby Saint-Pierre-Saint-Paul church, which stands at the centre of the city.

The Rueil barracks of the Swiss Guard were constructed in 1756 under Louis XV by the architect Axel Guillaumot, and have been classified Monument historique since 1973. The Guard was formed by Louis XIII in 1616 and massacred at the Tuileries on 10 August 1792 during the French Revolution.

During the Franco-Prussian War of 1870, Rueil was located on the front line.

At the end of the 19th century, Impressionist painters like Pierre-Auguste Renoir, Édouard Manet and Claude Monet came to paint the Seine River which crosses the town.

Rueil is (despite the title) the principal location of the novel Loin de Rueil by the French novelist Raymond Queneau.

The town is twinned with Walton-on-Thames, Surrey, in the United Kingdom.[1]

The Château de Malmaison, the residence of Napoléon's first wife Joséphine de Beauharnais, is located in Rueil-Malmaison. It is home to a Napoleonic museum. 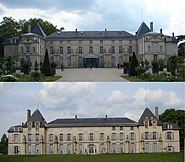 The main campus of the French Institute of Petroleum research organisation is in Rueil. The city has also become home to many large companies moving out of La Défense business district, located only 5 km (3.1 mi) from Rueil, a trend first established by the move of Esso headquarters to Rueil.

There are about 850 service sector companies located in Rueil, 70 of which employ more than 100 people. A business district called Rueil-sur-Seine (previously known as "Rueil 2000") was created near the RER A Rueil-Malmaison station to accommodate these companies. The business district is equipped with a fiber-optic network.

Several large international companies have also located their French headquarters in Rueil-Malmaison, such as ExxonMobil, AstraZeneca, American Express and Unilever.

There are tertiary educational institutions in the area.[12]

Rueil-Malmaison is twinned with:[14]