Familypedia
Register
Don't have an account?
Sign In
Advertisement
in: Cheney (surname), Born in 1895, Died in 1990,
and 9 more

Born Ruth Cheney on October 2, 1895 in Brookline, Massachusetts. she graduated from Bryn Mawr College in 1918.[2]

On June 23, 1917, she married Thomas W. Streeter; they went on to have four children.[3][4] They lived in Morristown, New Jersey, where she was involved in civic affairs, and served as the first woman president of the Morris County, New Jersey Welfare Board.

On January 29, 1943, she was commissioned as a major and appointed director of the United States Marine Corps Women's Reserve. She was promoted to lieutenant colonel later that year, and to full colonel in 1944.[1] She resigned her commission on December 6, 1945.[5] During Streeter's tenure, the Women's Reserve grew to a size of 831 officers and 17,714 enlisted.[6]

In 1946, she was awarded the Legion of Merit. The accompanying citation states in part:

"Exercising judgment, initiative and ability, Colonel Streeter rendered distinctive service in directing the planning and organization of the Women's Reserve of the Marine Corps and skillfully integrating women into the basic structure of the Corps, carefully selected, trained and properly assigned them as replacements for men in shore establishments."[2]

In addition to the Legion of Merit, Streeter was also awarded the American Campaign Medal and the World War II Victory Medal.[6]

In 1947, she was appointed as a member of the New Jersey Constitutional Convention.[7] 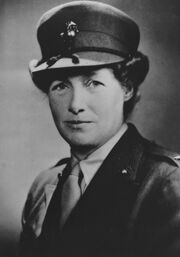