Rutherford Birchard Hayes (October 4, 1822 – January 17, 1893) was an American politician, lawyer, military leader and the 19th President of the United States (1877–1881). Hayes was elected President by one electoral vote after the highly disputed election of 1876. Losing the popular vote to his opponent, Samuel Tilden, Hayes was the only president whose election was decided by a congressional commission.

President Hayes was president of the US during the 1880 US Census, and oddly enough, his household was improperly counted twice in the Federal Census of that year - once in Ohio and again in D.C. 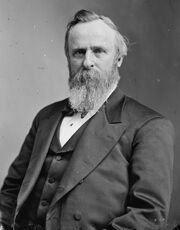