Familypedia
Register
Don't have an account?
Sign In
Advertisement
in: Houston (surname), Born in 1793, Died in 1863,
and 28 more

Samuel "Sam" Houston (March 2, 1793 – July 26, 1863) was an American politician and soldier, best known for his role in bringing Texas into the United States as a constituent state. His victory at the Battle of San Jacinto secured the independence of Texas from Mexico in one of the shortest decisive battles in modern history. He was also the only governor within a future Confederate state to oppose secession (which led to the outbreak of the American Civil War) and to refuse an oath of allegiance to the Confederacy, a decision that led to his removal from office by the Texas secession convention.[1]

Houston was born at Timber Ridge Plantation in Rockbridge County, Virginia. He was of Scots-Irish descent. After moving to Tennessee, he spent time with the Cherokee Nation, into which he later was adopted as a citizen and into which he married. He performed military service during the War of 1812 and successfully participated in Tennessee politics. In 1827, Houston was elected Governor of Tennessee as a Jacksonian.[2] In 1829, he resigned as governor and relocated to the Arkansas Territory.[3]

In 1832, Houston was involved in an altercation with a U.S. Congressman, followed by a high-profile trial.[4] Shortly afterwards, he moved west to Coahuila y Tejas, then a Mexican state, and became a leader of the Texas Revolution.[5]

After the war, Houston became a key figure in Texas and was elected as the first and third President of the Republic of Texas. He supported annexation by the United States[6] and he became a U.S. Senator upon achieving it in 1845, and finally a governor of the State of Texas in 1859, whereby Houston became the only person to have become the governor of two different U.S. states through popular election, as well as the only state governor to have been a foreign head of state.

As governor, he refused to swear loyalty to the Confederacy when Texas seceded from the Union in 1861 with the outbreak of the American Civil War, and he was removed from office.[7] To avoid bloodshed, he refused an offer of a Union army to put down the Confederate rebellion. Instead, he retired to Huntsville, Texas, where he died before the end of the war.

Houston's name has been honored in numerous ways. He is the namesake of the city of Houston, Texas's most populous city and the fourth most populous city in the U.S.. Other things named for Sam Houston include a memorial museum, five U.S. naval vessels named USS Houston (AK-1, CA-30, CL-81, SSBN-609, and SSN-713), a U.S. Army base, a national forest, a historical park, a university, an elementary school in Lebanon, TN (Sam Houston Elementary), and a prominent roadside statue outside of Huntsville.

Sam Houston was the fifth son of Major Samuel Houston and Elizabeth Paxton. Houston's paternal ancestry is often traced to his great-great grandfather Sir John Houston, who built a family estate in Scotland in the late seventeenth century. His second son John Houston emigrated to Ulster, Ireland during the Ulster plantation period. Under the system of primogeniture, he did not inherit the estate. A historic plaque near Larne in County Antrim, Northern Ireland tells the story of the Houston family. It is located in Ballyboley Forest Park near the site of the original John Houston estate.

After several years in Ireland, John Houston immigrated in 1735 with his family to the North American colonies, where they first settled in Pennsylvania. Houston decided to migrate south with other Scots-Irish, who settled in the back country of lands in the Shenandoah Valley of Virginia.[8] Scots-Irish newcomers included the Lyle family of the Raloo area who helped found Timber Ridge Presbyterian Church, and the Houston family settled nearby. Gradually, John Houston developed his land and purchased slaves.[8] His son Robert inherited his land, and the youngest of Robert's five sons was Samuel Houston.

Samuel Houston became a member of Morgan's Rifle Brigade and was commissioned a major during the American Revolutionary War. At the time, militia officers were expected to pay their own expenses. He had married Elizabeth Paxton and inherited his father's land, but he was not a good manager and got into debt, in part because of his militia service.[9] Their children were born on his family's plantation near Timber Ridge Church, including Sam Houston on March 2, 1793, the fifth of nine children and the fifth son. The senior Samuel and Elizabeth's children were Paxton (b. 1783), Robert (b. 1787), James (b. 1788), John Paxton (b. 1790; first clerk of Izard County, Arkansas, 1819–1838), Samuel (b. 1793), William (b. 1794), Isabella (b. 1796), Mary Blair (b. 1797), and Elizabeth Ann (b. 1800). Today, Timber Ridge Plantation maintains a log building which tradition claims was constructed from logs salvaged from the Sam Houston birthplace cabin.[10]

Planning to move on and leave debts behind, the elder Samuel Houston patented land near relatives in Maryville, the county seat of Blount County, Tennessee. He died in 1807 before he could complete the move, which Elizabeth subsequently undertook, along with their five sons and three daughters. She took them to the eastern part of the new state, which had been admitted to the Union in 1796.[8]

Young Sam was 14 when his family moved to Maryville, and he had received only a basic education on the Virginia frontier.[11] He ran away from home in 1809 at age 16 because he was dissatisfied working as a shop clerk in his older brothers' store. He went southwest and lived for a few years with the Cherokee tribe led by Ahuludegi (also spelled Oolooteka) on Hiwassee Island in the Hiwassee River, above its confluence with the Tennessee River. Ahuludegi had become hereditary chief after his brother moved west; American settlers in the area called him John Jolly. He became an adoptive father to Houston, giving him the Cherokee name of Colonneh, meaning "the Raven".[12] Houston became fluent in the Cherokee language while living with the tribe.

He visited his family in Maryville every few months. He returned to Maryville in 1812, and he was hired at age 19 for a term as schoolmaster of a one-room schoolhouse in Blount County between his town and Knoxville.[13][14] The school was preceded by others in the region, but it was the first built in Tennessee since entering the Union.

Annotated References for the family of General Samuel Houston (1793-1863) 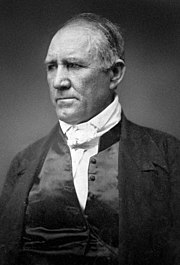