San Bernardino County, officially the County of San Bernardino, is a county located in the southern portion of the U.S. state of California, and is located within the Inland Empire area. As of the 2010 U.S. Census, the population was 2,035,210,[4] making it the fifth-most populous county in California and the 14th-most populous in the United States. The county seat is San Bernardino.[5]

With an area of 20,105 square miles (52,070 km2), San Bernardino County is the largest county in the contiguous United States by area, although some of Alaska's boroughs and census areas are larger. The county is close to the size of West Virginia.

This vast county stretches from where the bulk of the county population resides in three Census County Divisions (Fontana, San Bernardino, and Victorville-Hesperia), counting 1,793,186 people as of the 2010 Census, covering the 1,730 square miles (4,480 km2), across the thinly populated deserts and mountains. It spans an area from south of the San Bernardino Mountains in San Bernardino Valley, to the Nevada border and the Colorado River.

With a population that is 53.7% Hispanic as of 2020, it is California's most populous majority-Hispanic county and the second-largest nationwide.[6]

Spanish Missionaries from Mission San Gabriel Arcángel established a church at the village of Politania in 1810. Father Francisco Dumetz named the church San Bernardino on May 20, 1810, after the feast day of St. Bernardino of Siena. The Franciscans also gave the name San Bernardino to the snowcapped peak in Southern California, in honor of the saint and it is from him that the county derives its name.[7] In 1819, they established the San Bernardino de Sena Estancia, a mission farm in what is now Redlands.

Following Mexican independence from Spain in 1821, Mexican citizens were granted land grants to establish ranchos in the area of the county. Rancho Jurupa in 1838, Rancho Cucamonga and El Rincon in 1839, Rancho Santa Ana del Chino in 1841, Rancho San Bernardino in 1842 and Rancho Muscupiabe in 1844.

Agua Mansa was the first town in what became San Bernardino County, settled by immigrants from New Mexico on land donated from the Rancho Jurupa in 1841.

Following the purchase of Rancho San Bernardino, and the establishment of the town of San Bernardino in 1851 by Mormon colonists, San Bernardino County was formed in 1853 from parts of Los Angeles County. Some of the southern parts of the county's territory were given to Riverside County in 1893. 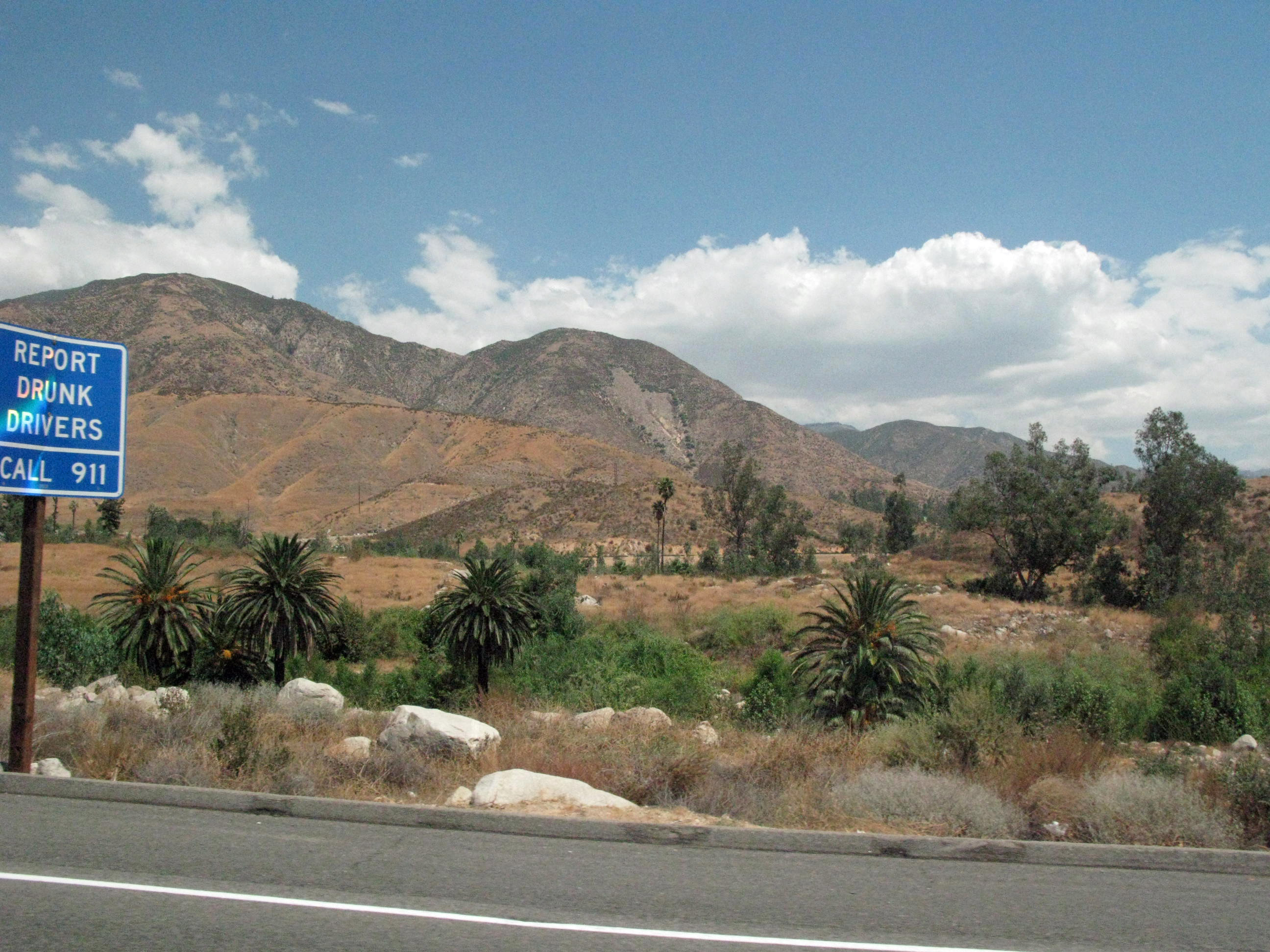 The Arrowhead natural feature is the source of many local names and icons, such as Lake Arrowhead and the county's seal.
<div style="float: left; margin: 1px; width: Expression error: Unrecognized punctuation character "{".px"> 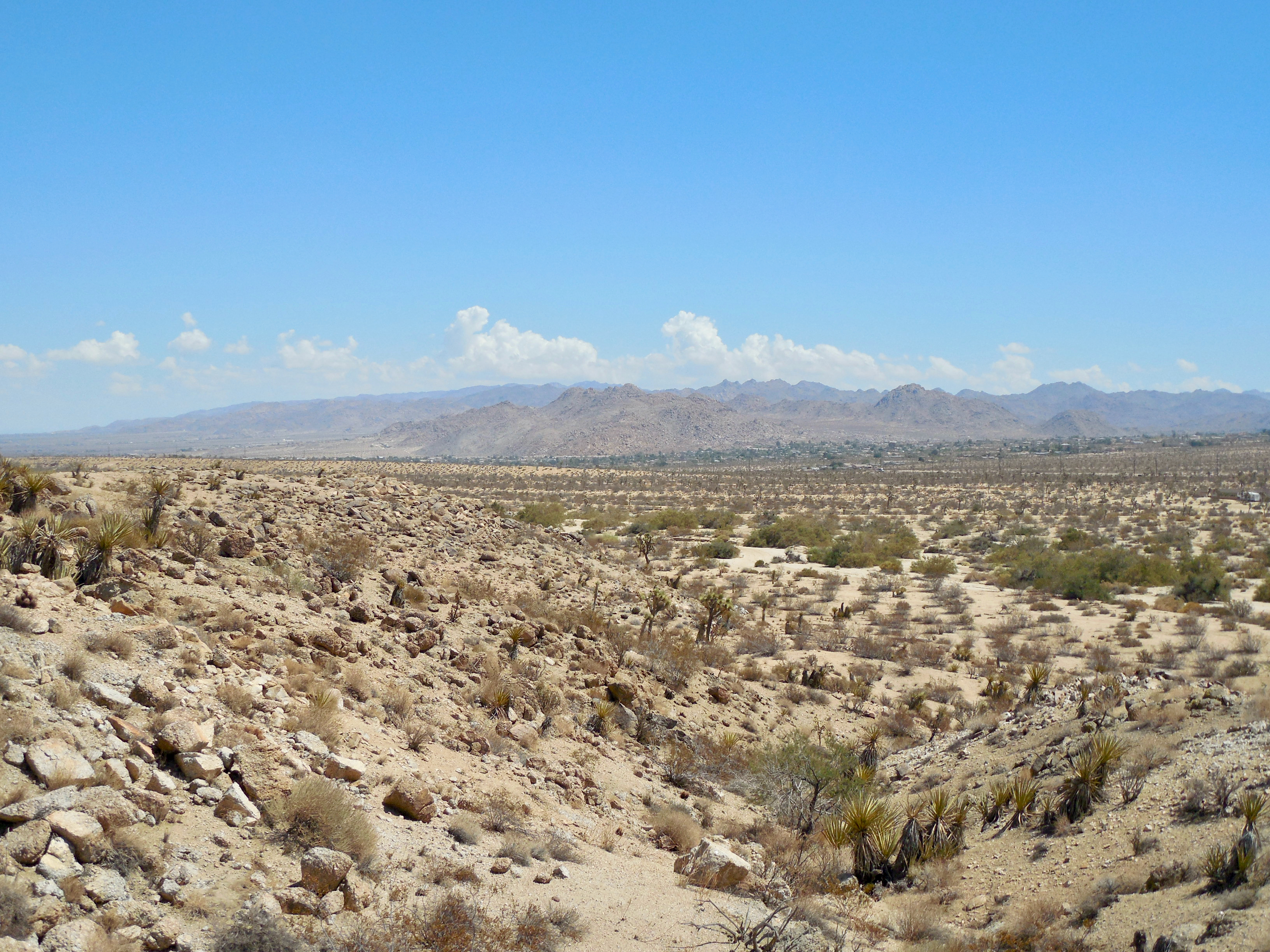 The Mojave National Preserve covers some of the eastern desert, especially between Interstate 15 and Interstate 40. The desert portion also includes the cities of Needles next to the Colorado River and Barstow at the junction of Interstate 15 and Interstate 40. Trona is at the northwestern part of the county, west of Death Valley. This national park, mostly within Inyo County, also has a small portion of land within San Bernardino County. The largest metropolitan area in the Mojave Desert part of the county is the Victor Valley, with the incorporated localities of Adelanto, Apple Valley, Hesperia, and Victorville. Further south, a portion of Joshua Tree National Park overlaps the county near the High Desert area, in the vicinity of Twentynine Palms. The remaining towns make up the remainder of the High Desert: Pioneertown, Yucca Valley, Joshua Tree, Landers, and Morongo Valley.

The mountains are home to the San Bernardino National Forest, and include the communities of Crestline, Lake Arrowhead, Running Springs, Big Bear City, Forest Falls, and Big Bear Lake.

More than 80% of the county's land is owned by the federal government.[10] There are at least 35 official wilderness areas in the county that are part of the National Wilderness Preservation System. This is the largest number of any county in the United States (although not the largest in total area). The majority are managed by the Bureau of Land Management, but some are integral components of the above listed national protected areas. Most of these wilderness areas lie entirely within the county, but a few are shared with neighboring counties (and two of these are shared with the neighboring states of Arizona and Nevada).

Except as noted, these wilderness areas are managed solely by the Bureau of Land Management and lie within San Bernardino County:

There were 528,594 households, out of which 43.7% had children under the age of 18 living with them, 55.8% were married couples living together, 14.8% had a female householder with no husband present, and 23.5% were non-families. 18.4% of all households were made up of individuals, and 6.6% had someone 65 years of age or older living alone. The average household size was 3.2 people, and the average family size was 3.6 people.

The San Bernardino County Board of Supervisors has 5 members elected from their districts:[26]

In the United States House of Representatives, San Bernardino County is split between 5 congressional districts:[28]

In the California State Assembly, San Bernardino County is split between 8 assembly districts:[29]

In the California State Senate, San Bernardino County is split between 6 districts:[30]

San Bernardino County is a county in which candidates from both major political parties have won in recent elections. Democrat Hillary Clinton carried the county by a majority and by double digits in 2016. The Democratic Party also carried the county in 2008 and 2012, when Barack Obama won majorities of the county's votes, and in 1992 and 1996, when Bill Clinton won pluralities. Republican George W. Bush took the county in 2000 by a plurality and in 2004 by a majority. The county is split between heavily Latino, middle-class, and Democratic areas and more wealthy conservative areas. The heavily Latino cities of Ontario and San Bernardino went for John Kerry in 2004, but with a relatively low voter turnout. In 2006, San Bernardino's population exceeded 201,000, and in 2004, only 42,520 votes were cast in the city; in 2006, strongly Republican Rancho Cucamonga had over 145,000 residents, of whom 53,054 voted.

The current district attorney is Jason Anderson, who was elected in March 2018 and took office on January 1, 2019.

The county operates the San Bernardino County Consolidated Fire District (commonly known as the San Bernardino County Fire Department). The department provides "all-risk" fire, rescue, and emergency medical services to all unincorporated areas in the county except for several areas served by independent fire protection districts, and several cities that chose to contract with the department.

California Attorney General Jerry Brown sued the county in April 2007 under the state's environmental quality act for failing to account for the impact of global warming in the county's 25-year growth plan, approved in March. The Center for Biological Diversity, the Sierra Club and the Audubon Society also sued in a separate case. According to Brendan Cummings, a senior attorney for the plaintiffs: "San Bernardino has never seen a project it didn't like. They rubber-stamp development. It's very much of a frontier mentality." The plaintiffs want the county to rewrite its growth plan's environmental impact statement to include methods to measure greenhouse gases and take steps to reduce them.[43]

According to county spokesman David Wert, only 15% of the county is controlled by the county; the rest is cities and federal and state land. However, the county says it will make sure employment centers and housing are near transportation corridors to reduce traffic and do more to promote compact development and mass transit. The county budgeted $325,000 to fight the lawsuit.[43]

The state and the county reached a settlement in August 2007.[44] The county agreed to amend its general plan to include a Greenhouse Gas Emissions Reduction Plan, including an emission inventory and reduction targets.

The population ranking of the following table is based on the 2020 census of San Bernardino County.[48]

Newspapers, past and present[]