Familypedia
Register
Don't have an account?
Sign In
Advertisement
in: Saxony, States of Germany, States of the Weimar Republic,
and 2 more

Edit
This article is about the modern state of Saxony in present-day Germany. For other uses, see Saxony (disambiguation).

The Free State of Saxony (German: Freistaat Sachsen [ˈfʁaɪʃtaːt ˈzaksən]; Upper Sorbian: Swobodny stat Sakska) is a state of Germany, located in the southeastern part of present-day Germany. It is the tenth-largest German state in area (18,413 km²) and the sixth largest in population (4.3 million), of Germany's sixteen states.

Located in the historical heart of German-speaking Europe, the history of the state of Saxony spans more than a millennium. It has been a medieval duchy, an electorate of the Holy Roman Empire, a kingdom and, since 1918, a republic.

During the early Middle Ages the term Saxony referred to the region occupied by today's states of Lower Saxony and northern North Rhine-Westphalia..

Sachsen is divided into three Direktionsbezirke — Chemnitz, Dresden, Leipzig — which are subdivided into 10 districts: 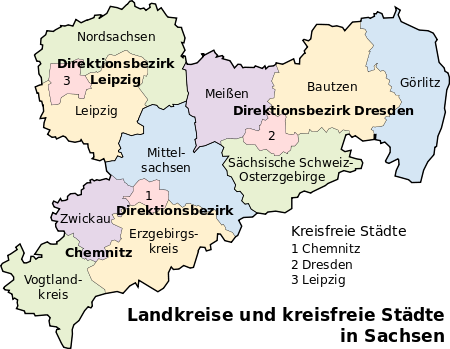 In addition there are three urban districts (German: kreisfreie Städte), which also have district status:

Saxony has the most vibrant economy among the former GDR states. Its economy grew by 4.0% in 2006, making it the fastest growing region in Germany. Nonetheless, unemployment remains high, and investment is scarce. The eastern part of Germany, excluding Berlin, qualifies as an "Objective 1" development region within the European Union, and is eligible to receive investment subsidies of up to 30% until 2013. FutureSAX, a business plan competition and entrepreneurial support organization, has been in operation since 2002.

Microchip makers near Dresden have given the region a nickname of "Silicon Saxony". The publishing and porcelain industries of the region are well known, although their contributions to the regional economy are not significant. The state government is attempting to develop tourism, notably in the lake district of Lausitz[2].

Saxony has a long history as a duchy, an electorate of the Holy Roman Empire (the Electorate of Saxony), and eventually as a kingdom (the Kingdom of Saxony). In 1918, subsequent to Germany's defeat in World War I, its monarchy was overthrown and a republican form of government was established under its current name. The state was broken up into smaller units during communist rule (1949–1989), but was re-established on 3 October 1990 on the reunification of East and West Germany.

In prehistoric times, the territory of Saxony was the site of some of the largest of the ancient Central European monumental temples, dating from the 5th century BC. Notable archaeological sites have been discovered in Dresden and the villages of Eythra and Zwenkau near Leipzig. The first Germanic presence in the territory of today's Saxony is thought to be in the 1st century BC. Parts of Saxony were possibly under the control of Germanic King Marobod during the Roman era. By the late Roman period, several tribes known as the Saxons emerged, from which the subsequent state(s) draw their name. For the origins of the Saxon tribes, see Saxons.

The first mediæval Duchy of Saxony was a late Early Middle Ages "Carolingian stem duchy", which emerged about 700CE, and grew to cover the greater part of Northern Germany. It covered the area of the modern German states of Lower Saxony, North Rhine-Westphalia, Schleswig-Holstein and Saxony-Anhalt. The Saxons were converted to Christianity during this period by Charlemagne, despite fierce resistance by the Saxon chieftains.

While the Saxons were facing pressure from Charlemagne's post-Roman, Latin Christian world, they were also facing a westward push by Slavs to the east. The territory of the Free State of Saxony was briefly occupied by Slavs before being reconquered by the Germans. A legacy of this period is the small Sorb population in Saxony.

The territory of the Free State of Saxony became part of the Holy Roman Empire by the 10th century. In the 10th century, the dukes of Saxony were also kings (or emperors) of the Holy Roman Empire, comprising the Ottonian, or Saxon, Dynasty. Around this time, the Billungs, a Saxon noble family, received extensive fiefs in Saxony. The Emperor eventually gave them the title of Duke of Saxony. After Duke Magnus died in 1106, causing the extinction of the male line of Billungs, oversight of the duchy was given to Lothar of Supplinburg, who also became Emperor for a short time.

In 1137, control of Saxony passed to the Guelph dynasty, descendants of Wulfhild Billung, eldest daughter of the last Billung duke, and the daughter of Lothar of Supplinburg. In 1180 large portions west of the Weser were ceded to the Bishops of Cologne, while some central parts between the Weser and the Elbe remained to the Guelphs, later forming the Duchy of Brunswick-Lüneburg). The remaining eastern lands, together with the title of Duke of Saxony, passed to an Ascanian dynasty (descended from Eilika Billung, Wulfhild's younger sister) and was divided in 1260 into the two small states of Saxe-Lauenburg and Saxe-Wittenberg, the former also named Lower Saxony, the latter Upper Saxony, thence the later names of the two Imperial Circles. Saxe-Lauenburg and Saxe-Wittenberg both claimed the Saxon electoral privilege for their part, but the Golden Bull of 1356 only accepted Wittenberg's claim, with Lauenburg nevertheless maintaining its claim. In 1422, when the Saxon electoral line of the Ascanians was extinct, the Ascanian Eric V of Saxe-Lauenburg tried to reunite the Saxon duchies.

However, Sigismund, King of the Romans, had already granted Margrave Frederick IV the Warlike of Meissen (House of Wettin) an expectancy on the Saxon electorate, in order to remunerate his military support. On 1 August 1425 Sigismund enfeoffed the Wettinian Frederick as Prince-Elector of Saxony, despite protestations of Eric V. Thus the Saxon territories remained separated in permanence. Electoral Saxony was then merged in the much bigger Wettinian Margraviate of Meissen, however using the higher ranking name Electorate of Saxony and even the Ascanian coat-of-arms for the entire monarchy.[4] Thus the name Saxony was translated to areas as far as Dresden and Meissen. In the 18th and 19th c. Saxe-Lauenburg became colloquially called the Duchy of Lauenburg, which in 1876 merged in Prussia as Duchy of Lauenburg district.

Foundation of the second Saxon state[]

Saxony-Wittenberg, in modern Saxony-Anhalt, became subject to the margravate of Meissen, ruled by the Wettin dynasty in 1423. This established a new and powerful state, occupying large portions of the present Free State of Saxony, Thuringia, and Saxony-Anhalt. Although the center of this state was far to the southeast of the former Saxony, it came to be referred to as Upper Saxony and then simply Saxony, while the former Saxon territories were now known as Lower Saxony.

In 1485, Saxony was split. A collateral line of the Wettin princes received what later became Thuringia and founded several small states there (see Ernestine duchies). The remaining Saxon state became still more powerful, becoming known in the 18th century for its cultural achievements, although it was politically inferior to Prussia and Austria, which pressed Saxony from either side.

In 1806, French Emperor Napoleon abolished the Holy Roman Empire and decreed the Electorate of Saxony a kingdom in itself. Elector Frederick Augustus III became King Frederick Augustus I. Frederick Augustus remained loyal to Napoleon during the wars that swept Europe in the following years; he was taken prisoner and his territories declared forfeit by the allies in 1813, who intended the annexation of Saxony by Prussia. Ultimately, the opposition of Austria, France, and the United Kingdom to this plan resulted in the restoration of Frederick Augustus to his throne at the Congress of Vienna. At this time in 1815, Saxony was forced to cede the northern part of the kingdom to Prussia.[5] These lands became the Prussian province of Saxony, incorporated today in Saxony-Anhalt. The remnant of the Kingdom of Saxony was roughly identical with the present federal state.

In 1854 King Friedrich August II's brother, King Johann of Saxony, succeeded to the throne. A scholar, King Johann translated Dante.[10] King Johann followed a federalistic and pro-Austrian policy throughout the early 1860s until the outbreak of the Austro-Prussian War. During the war, Saxony was immediately overrun? occupied? by Prussian troops.[11] After the Austro-Prussian War, Saxony was forced to pay an indemnity and was forced joined the North German Confederation in 1867.[12] Under the terms of the North German Confederation, Prussia took over control of the Saxon postal system, railroads, military and foreign affairs.[13] In the Franco-Prussian War of 1870, Saxon troops fought together with Prussian troops against France.[14] In 1871, Saxony joined the newly formed German Empire.[15]

After 1918, Saxony was a state in the Weimar Republic and was the scene of Gustav Stresemann's overthrow of the SPD-led government in 1923. The state maintained its name and borders during the National Socialist era as a Gau, but lost any quasi-autonomous status. In April 1945, American troops under General Patton conquered the western part of the Free State while Soviet troops conquered the eastern part. That summer, the entire state was handed over to the Soviet Union as part of the Potsdam Conference agreement on post-war occupation zones.

The Soviet Union set up the communist government of the German Democratic Republic in 1949, giving the USSR a satellite in the heart of Europe. The communist government officially dissolved the Free State in 1952, and divided it into three smaller Bezirke based on Leipzig, Dresden, and Karl-Marx-Stadt. The state reconstituted with slightly altered borders in 1990 upon German reunification. The border alterations revolve around the Oder-Neisse line. Present-day Saxony includes a small part of Prussian province of Lower Silesia that was located to the west of the 1945 borders of the town of Görlitz, but excludes all the former territory of Saxony east of the same line. This territory, like the majority of Silesia, was incorporated into post-war Poland.

Upper Sorbian (a Slavic language) is still actively spoken in the parts of Upper Lusatia that are occupied by the Sorbian minority. The Germans in Upper Lusatia speak distinct dialects of their own (Lusatian dialects).

Except for Dresden and perhaps Leipzig, Saxony is not known as a primary destination for foreign tourists. Areas along the border with the Czech Republic, such as the Lusatian Mountains, Ore Mountains, Saxon Switzerland, and Vogtland, attract significant visitors, largely Germans. Saxony has well preserved historic towns such as Meissen, Freiberg, Pirna, Bautzen, and Görlitz.

The center-right CDU has formed a coalition with the liberal democratic FDP.

Template:States of the Weimar Republic