Familypedia
Register
Don't have an account?
Sign In
Advertisement
in: Saxony-Anhalt, States of Germany, NUTS 1 statistical regions of the European Union,
and 2 more

Saxony-Anhalt (German: Sachsen-Anhalt, pronounced [ˌzaksən ˈanhalt]) is a landlocked state of Germany. Its capital is Magdeburg and it is surrounded by the German states of Lower Saxony, Brandenburg, Saxony, and Thuringia.

Saxony-Anhalt should not be confused with Saxony or Lower Saxony, also German states.

Saxony-Anhalt is one of 16 states of Germany. It is located in the western part of eastern Germany. By size, it is the 8th largest state in Germany, and by population, the 10th largest.

In the north, Saxony-Anhalt is dominated by plain. In the sparsely populated Altmark, old Hanseatic cities like Salzwedel, Gardelegen, Stendal, or Tangermünde are located. The transition from the Altmark region to the Elbe-Börde-Heath region with its fertile, sparsely wooded Magdeburg Börde is accomplished by the Colbitz-Letzlingen Heath and the Drömling near Wolfsburg. In the Magdeburg Börde you can find the cities of Haldensleben, Oschersleben (Bode), Wanzleben, Schönebeck (Elbe), Aschersleben, and Magdeburg, from which the region derives its name.

In the south-west, the Harz mountains are located, comprising the Harz National Park, the Harz foreland and the Mansfeld Land. The highest mountain in the vicinity is Brocken, with an elevation of 1,141 meters (3,735 ft), which at the same time is the highest elevation in northern Germany. In this area, one can find the cities of Halberstadt, Wernigerode, Thale, Eisleben, or Quedlinburg.

Located at the River Saale and Unstrut in the south of the state, you find the winegrowing area Saale-Unstrut and the cities of Zeitz, Naumburg (Saale), Weißenfeld, and Freyburg (Unstrut).

Neighboring Saxony, you can find the metropolitan area of Halle (Saale)/Merseburg/Bitterfeld-Wolfen (called Chemiedreieck - chemical triangle) which reaches to the Leipzig agglomeration. In former times, the chemical industry had its economical focus on this area around Leuna.

Finally, in the east, Dessau-Roßlau is situated at the River Elbe (as is the capital Magdeburg) amidst the Anhalt-Wittenberg region.

The capital of Saxony-Anhalt is Magdeburg. It is the largest city[4] in the state, head-to-head with Halle. 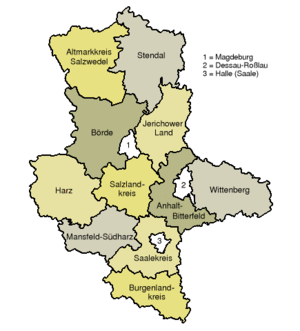 The rural districts are

and the three urban districts

Anhalt takes its name from Anhalt Castle near Harzgerode; the origin of the name of the castle remains unknown.

When Prussia was disbanded in 1947, the province became the state Saxony-Anhalt. It became part of the German Democratic Republic (East Germany) in 1949. From 1952 to 1990 Saxony-Anhalt was divided into the East German districts of Halle and Magdeburg. In 1990, in the course of German reunification, the districts were reintegrated as a state.

Former Minister-president Wolfgang Böhmer (CDU) did not run for re-election.

These are the official election results (secondary votes):[6]

Saxony-Anhalt is famous for its good soil. The "Magdeburger Börde" contains the best soil in all of Germany and some of the best of Europe. It is often said by the local populace that the smoothness of the soil is more luxurious than balls of silk. The food industry has an important role in this state. Some of the best known products are "Baumkuchen" from Salzwedel (Altmark) or "Hallorenkugeln" from Halle.

In the industrial sector the chemical industry is quite important. One of the biggest chemical producing areas can be found around the cities of Wolfen and Bitterfeld. Because of the chemical industry, Saxony-Anhalt is the largest receiver of foreign direct investments in all of eastern Germany.

Saxony-Anhalt is also the location of numerous "wind farms" throughout the state producing wind-turbine energy.

In 2010 80 % of citizens in Saxony-Anhalt were non-denominational and more were leaving the churches than entering them.[7]