Shelby County is a county located in the U.S. state of Tennessee. As of the 2020 census, the population was 929,744.[3] It is the largest of the state's 95 counties, both in terms of population and geographic area. Its county seat is Memphis,[4] a port on the Mississippi River and the second most populous city in Tennessee. The county was named for Governor Isaac Shelby (1750–1826) of Kentucky. It is one of only two remaining counties in Tennessee, along with Haywood County, with a majority African American population.

Shelby County is part of the Memphis, TN-MS-AR Metropolitan Statistical Area. It is bordered on the west by the Mississippi River. Located within the Mississippi Delta, the county was developed as a center of cotton plantations in the antebellum era, and cotton continued as an important commodity crop well into the 20th century. The economy has become more diversified.

Template:Section citations needed This area along the Mississippi River valley was long occupied by varying cultures of indigenous peoples. In historic times, the Chickasaw controlled much of this area. They are believed to be descendants of the important Mississippian culture, which established fortified and complex cities. The largest of these was Cahokia, which was active from about 950CE into the 15th century. It was developed on the east side of the Mississippi in present-day southern Illinois, roughly on the same latitude as present-day St. Louis, Missouri.

The Shelby County area was part of the lands acquired by the United States government from the Chickasaw as part of the Jackson Purchase of 1818. Shelby County was established by European-American migrants in 1819 and named for Isaac Shelby, the former governor of Kentucky who had helped negotiate the land acquisition.[1] From 1827 to 1868, the county seat was located at Raleigh, Tennessee, on the Wolf River.[5] After the American Civil War, in recognition of the growth of Memphis and its importance to the state economy, the seat was moved there. (Raleigh has now been absorbed within the city limits of Memphis.)[1]

The lowlands in the Mississippi Delta, closest to the Mississippi River, were developed before the war for large cotton plantations; their laborers were overwhelmingly enslaved African Americans, whom planters transported from the east or purchased in the domestic slave trade. Well before the American Civil War, the population of the county was majority black, most of whom were slaves. Memphis developed as a major cotton market, with many brokers. After the war and emancipation, many freedmen stayed on these lands by working as sharecroppers.

Most blacks were disenfranchised around the turn of the century when the state passed laws raising barriers to voter registration; the legislature also imposed Jim Crow laws, including racial segregation of public facilities. Blacks were mostly closed out of the political system for more than six decades. In the 20th century, mechanization of agriculture reduced the need for farm workers at a time when industries and railroads in the North were recruiting workers. The Great Migration resulted in many African Americans moving from rural areas into Memphis or out of state to northern cities for work and social and political opportunities.

After World War II, highways were constructed that led to development of much new housing on the outskirts of Memphis where land was cheap. Suburbanization, with retail businesses following new residents, took place in the county, drawing population out of the city. With continued residential and suburban development, the population of the metropolitan area became majority white. Six towns in the county have become incorporated; other communities are unincorporated. Residents enjoy many parks in the area as well as attractions in the city of Memphis.

According to the U.S. Census Bureau, the county has a total area of 785 square miles (2,030 km2), of which 763 square miles (1,980 km2) is land and 22 square miles (57 km2) (2.8%) is water.[7] It is the largest county in Tennessee by area. The lowest point in the state of Tennessee is located on the Mississippi River in Shelby County (just outside the Memphis city limits), where the river flows out of Tennessee and into Mississippi.

The first county government was established as a quarterly court in 1820. During Reconstruction following the American Civil War, Governor William G. Brownlow appointed a five-member commission to govern the county. When the state drafted a new constitution in 1870, it required county officials to be elected by the people or the Quarterly Court. By 1910 the Shelby County Quarterly Court had 50 members, making it inefficient; some prominent people complained it was "too democratic."

E. H. Crump, the political boss of Memphis who was also influential in the county and state, gained a 1911 legislative act creating a three-member executive commission for the Shelby County Commission, which could override the court on all issues except setting property taxes, which was protected by the state constitution. He also had the number of districts reduced to nineteen and then seven.[14] After Crump's death in 1954, the executive commission of the county was abolished.[15]

In 1964, the US Supreme Court ruled in Baker v. Carr that legislative districts had to be apportioned by population under the Equal Protection Clause, a principle known as one man, one vote. This change was incorporated in Shelby County, which had been biased toward geographic representation. In 1965, there were nine districts established, of roughly equal population, to elect members to the Quarterly Court.[14] These have been redistricted as needed based on decennial census population changes.

In 1975, the people voted to ratify the Shelby County Restructure Act, creating a single elected executive, with the title of mayor, and an eleven-member legislative body (now called the County Commission). The Commission has been expanded to thirteen members. The mayor and all the county commissioners are elected at-large; the latter represent 13 districts.[16] The members of the county commission serve four-year terms.

The government has an annual budget of $1.1 billion and 6,000 employees.

Until 1996, the Shelby County Commission appointed members to the Shelby County School Board. This system was changed to comply with interpretation by the state that its constitution required that county officials, including school board members, should be elected by all residents of the county, and provisions of the state Education Improvement Act. In 1996 under what was known as Plan C, the Shelby County Commission established seven single-member special election districts for election of county school board members by all residents of the county. This was challenged in the case known as Board of County Commissioners of Shelby County Tennessee v. Burson.[18] Shelby County and its Board of Commissioners as plaintiffs, joined by mayors of the six suburban municipalities, filed suit in 1996 against Plan C, arguing that their rights were violated under the "one person, one vote" principle embodied in the Equal Protection Clause of the Fourteenth Amendment of the US Constitution, as their vote would be diluted. Although Memphis City had its own school system, the Memphis population made up 74.8% of the county's population in the 1990 census, so its representatives would dominate an elected county school board, with six of seven positions. Thus Memphis representatives would dominate a system intended to serve only county residents and students who lived outside the city.[18]

The US district court found in this case:

As a result, the County Commissioners established seven single-member special election districts in the county outside the limits of Memphis, for the purpose of electing school board members to the Shelby County School Board.

Shelby County's first elected mayor was Roy Nixon, who served from 1976 to 1978. The current Shelby County Mayor is Lee Harris, who was elected in 2018 after having served as the Minority Leader of the Tennessee Senate.[20]

Shelby County Board of Commissioners[]

It is by far the state's largest courthouse. The courthouse was featured in the movie The Silence of the Lambs as the place where Dr. Hannibal Lecter was held and escapes custody.

The courthouse is included in the Adams Avenue Historic District, listed on the National Register of Historic Places.[22]

During the mid-twentieth century, Shelby County was competitive, voting for the Democratic candidate six times and the Republican candidate five times between 1952 and 1992. In the twenty-first century, the county has become reliably Democratic, due mainly to the influence of Memphis. Barack Obama twice won the county with more than 60 percent of the vote. In 2016, the county was carried by the Democratic nominee Hillary Clinton, who won 62.0 percent of the vote to Donald Trump's 34.5 percent.[23]

Democratic strength is concentrated in Memphis itself, while the eastern suburbs are some of the most Republican areas in Tennessee and the South. In 2020, Joe Biden received 64.42% of the vote, which is the highest share for a Democrat since 1944.[23]

Shelby County is home to fourteen institutions of higher learning and satellite campuses of institutions whose main campus is in another county.

Cordova is home to Mid-America Baptist Theological Seminary. Germantown is home to a satellite campus of Union University.

In 2014, the incorporated suburbs of Arlington, Bartlett, Collierville, Germantown, Lakeland, and Millington (other than Memphis) broke away from the Unified System and formed their own municipal districts. Their residents had previously voted in favor of creating municipal school districts, and all voted to pass the related sales tax hike except for Millington, which narrowly rejected the sales tax hike by three votes.[25] On November 27, 2012, U.S. district court Judge Samuel Mays voided this vote since the state law passed at the time applied only to a specific area (which is unconstitutional). The Tennessee state legislature passed the law again, to include all of the state. All six suburbs voted again for the municipal districts and started classes on August 4, 2014.

* Once fully completed the mainline of I-69 will travel from Brownsville, TX to Port Huron, MI.

Shelby County is the site of Memphis International Airport, located 3 miles (5 km) south of the center of Memphis. 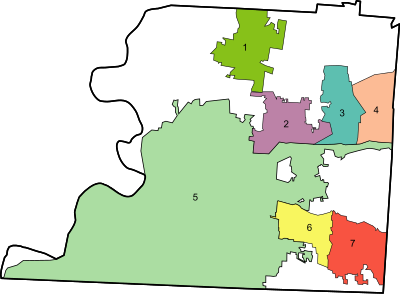 Numbers refer to the map at right.