Familypedia
Register
Don't have an account?
Sign In
Advertisement
in: Kimball (surname), Born in 1895, Died in 1985,
and 16 more

Kimball's grandfather, Heber C. Kimball, was one of the original Latter Day Saint apostles and later served as first counselor to Brigham Young in the First Presidency of the LDS Church. Through his aunt Helen Mar Kimball, he was a nephew of Joseph Smith, Jr.. His Aunt Helen had a son, Orson Ferguson Whitney (1855-1931) , Grandson - biographer - LDS Church Apostle and cousin to Spencer.

His wife, Camilla Eyring, is a granddaughter of Miles Park Romney. She is a direct cousin to Mormon Apostle Marion George Romney (1897-1988), who was a counselor to Spencer Kimball during his tenure as President of the church. Camilla is also a direct cousin to George Wilcken Romney (1907-1995), former governor of Michigan and father of 2012 US Presidential Candidate Mitt Romney.

His tenure at Apostle and Church President was noteworthy for the 1978 Revelation on the Priesthood which extended the opportunity to receive the priesthood to all worthy male members of the LDS Church.

The number of missionaries also greatly increased and a burst of temple building occurred. His book The Miracle of Forgiveness is one of the best-known church books within the LDS Church.

Kimball was born in Salt Lake City, Utah Territory to Andrew Kimball and Olive Woolley, sister of Mormon pioneer and eventual Mormon fundamentalist John W. Woolley. When Spencer was three, his father was called to preside as president of the St. Joseph stake and his family relocated to the town of Thatcher in southeastern Arizona.

During his childhood, Kimball suffered from typhoid fever and facial paralysis and once nearly drowned. Four of his sisters died in childhood, and his mother died when he was eleven.

After graduating from high school in 1914, he was called to serve as a missionary in the Germany-Swiss Mission, but due to World War I, was reassigned to the Central States Mission until 1916.

In 1917 he attended the University of Arizona, but received an army draft notice later that year. Despite several imminent departures, each was delayed and he was never called up.

During this time he courted Camilla Eyring, sister of the famous chemist Henry Eyring, and they married civilly on November 16, 1917 in Pima, Arizona. Seven months later, on June 7, 1918, the couple were sealed in a marriage ceremony in the Salt Lake Temple. They eventually had four children: Spencer L., Olive Beth, Andrew E., and Edward L.

Shortly after marrying, Kimball received employment in banking. After working for several different banks, in 1927 he started his own insurance and real estate agency. Additionally, he made a significant portion of his income as a debt collector. This he continued until his call into full time church service. Kimball was also actively involved in PTA, city council, Red Cross, Boy Scouts, and elected statewide leader of the Arizona Rotary Club in 1936.

In 1938 the St. Joseph Stake was divided, and Spencer was called to be the president of the new Mount Graham Stake. Concerned that some over whom he would preside might harbor ill feelings toward him, Spencer and Camilla visited with any who might have such feelings in order to “clear the slate.”

On July 8, 1943 Kimball was extended the call to be a member of the Quorum of the Twelve Apostles by J. Reuben Clark of the First Presidency. He was ordained an apostle and set apart as a member of that quorum on Thursday, October 7, 1943 in the Salt Lake Temple by church president Heber J. Grant. 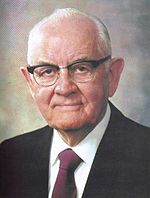