Familypedia
Register
Don't have an account?
Sign In
Advertisement
in: Unknown surname, Born in 1585, Died in 1622,
and 5 more

Edit with form
watch 01:25
Jurassic World: Dominion Dominates Fandom Wikis - The Loop
Do you like this video?
Play Sound

Tisquantum (more popularly known as Squanto was one of the last of the Patuxet, a Native North American people living on the western coast of Cape Cod Bay. He is known for having been an early liaison with the Mayflower settlers, who acted as a translator, guide and advisor as he lived among them for nearly a year.

Years before the Mayflower's first landing, Squanto was abducted by an English explorer/adventurer In 1614, who attempted to sell him and other kidnapped Natives in Spain. Squanto somehow made his way from Spain to England, where he resided for some time at the home of an official of the Newfoundland Company, during which time he learned the English language. In 1617 he accompanied an English explorer to Newfoundland.

There he met another explorer, Thomas Dermer, who, as a result of Squanto's descriptions, became interested in the commercial possibilities of southern New England. The two returned to England to seek permission to explore the area. From there in March 1619 Dermer and Squanto took passage on a vessel that had been fitted out for voyage to New England. On his return Squanto learned of the plague which had decimated the Patuxets and many other peoples in eastern New England. Squanto proved crucial in mediating between New England Natives and Dermer.

Although he is not mentioned by name in any English accounts prior to 1621, Massasoit (c1581-1661) and his brother Quadequina are undoubtedly the "two Kings, attended with a guard of fiftie armed men" that met Captain Thomas Dermer at Pokanoket in May 1619, when he was returning Tisquantum ("Squanto (c1585-1622)") to his homeland.

When Squanto left Dermer to search for the remnants of his people, Dermer was attacked by Natives and barely escaped to Virginia. No records exist of his activities from that time until his famous encounter with the Mayflower settlement in 1621, although it is likely he became a prisoner of the Pokanoket, the tribe that had subordinated (or attempted to) the Patuxets years before as part of the Wampanoag Confederacy.

The Mayflower, originating from London with a group of Adventurers bound for the New World rendezvoused on 22 July with the Speedwell just arriving from Holland with a group of religious refugees from Leiden. Originally intended to sail jointly to the English Colony in Virginia it soon became evident that Speedwell was not seaworthy. Passengers and cargo were combined onto Mayflower (with many left behind) for the journey, finally departing on September 9.

Squanto's chief fame resulted from his efforts to bring about peaceable contact and alliance between the English Separatists who had come to the New World on the Mayflower and the Pokanoket. Owing to his facility with English, Squanto played a key role in the early meetings in March 1621. He soon became attached to the Separatists, whom he assisted in plantings of native vegetables and dealings with other native tribes. As he became more trusted by the Separatists, Squanto engaged in an intrigue evidently designed to incite hostilities between the Separatists and certain Pokanoket. When the Great Sachem of the Pokanoket requested his life, the settlers failed to turn him over, creating a rift between the Separatists and the Pokanoket sachem. In September 1622, as a result of an increasing number of settlers sent from England, severe food shortages arose. Squanto accompanied William Bradford on an expedition to Cape Cod for the purpose of trading with the native inhabitants for food. It was during this expedition that Squanto fell ill and died.

Considerable mythology and legend has surrounded Squanto over time, largely because of early praise by Bradford and owing to the central role that the "Thanksgiving" festival of 1621 plays in American folk history. Bradford's later assessment of Squanto, however, was more realistic and acknowledged the more complicated character of the man.

From the record made (Circa 1651) by Gov Wm Bradford about early Plymouth settlers: 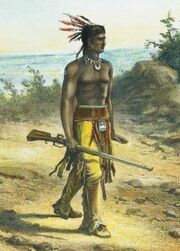