St Marys is a suburb in western Sydney, in the state of New South Wales, Australia. It is 45 kilometres west of the Sydney central business district, in the local government area of the City of Penrith.

The township of St Marys was first known as South Creek. The Bennett coach and wagon works manufactured horse-drawn wagons to meet the growing demand for transport in Sydney.[2]

The suburb is named after the parish church of St Mary Magdalene, built between 1837 and 1840 and situated between the Great Western Highway and King Street. The church foundation stone was laid on 22 November 1837 by Bishop Broughton. It is one of the oldest churches in New South Wales that still has regular services. The church is heritage-listed.[3] Internees in the church cemetery include the wife of Philip Gidley King, Governor of New South Wales, plus numerous members of the King family. The land was donated by King's son and the bricks were made on his estate. King, Gidley and Lethbridge Streets were named after various members of the King family.

The site is believed to have been chosen by the mother of Phillip Parker King. The property had been acquired from John Oxley in 1828 by King, the original grant having been made in 1823. Other land grants in the area included those to Anna Josepha King in 1807 (Dunheved), Samuel Marsden (Mamre), and Mary Putland (Frogmore).

The area was first called South Creek because European settlement was originally centred along the banks of the creek. The land grants became working holdings because of the permanent water supply. The rich alluvial soil along the banks of the creek ensured an expanding agricultural community and its location on what was then called the Great Western Road, later renamed to the Great Western Highway, meant that it became a convenient staging post.

The name St Marys was first used when the St Mary's Post Office was opened on 1 October 1840.[4] The township formed part of a grant to Mary Putland (later married Sir Maurice O'Connell), the daughter of Governor William Bligh (former master of HMS Bounty, during the famous mutiny in 1789). Closer settlement of the area was made possible when in 1842 part of the O’Connell Estate was subdivided.[5] St Marys has a long and rich industrial and agricultural history, including tanneries and munitions formerly operated by Australian Defence Industries.

Mamre, situated on Mamre Road, was built c.1830 for Samuel Marsden. It is a two-storey Georgian home that is heritage-listed.[6]

Circa 1829–32, the Lethbridge family built Werrington House just north of St Marys. It was based on the family home in Cornwall. It is one of the most significant colonial homes in New South Wales and is heritage-listed.[6][7]

The Municipality of St Marys was proclaimed on 3 March 1890, and the election of the first council was held in May 1890. The council was amalgamated with the Municipality of Penrith on 1 January 1949.[8] The first Mayor was William Garner, and the last mayor was J J Blair (1948). There is a branch office of the Penrith City Council on Queen Street along with a library. The St Marys & District Historical Society is open to the public on Wednesdays and Saturdays from 10 am to 2 pm in the Community Centre complex located on Mamre Road on the southern side of the Great Western Highway.

St Marys has a number of heritage-listed sites, including: 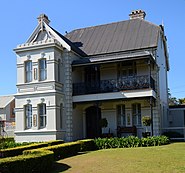 Grave of members of the King family, cemetery of St Mary's Church

The main commercial area of St Marys, is primarily on Queen Street, with some shops along Railway Street, and the Great Western Highway. This area includes:

Station Plaza is a shopping centre which includes a Coles Supermarket and around 16 speciality stores. It is located on Phillip Street opposite the St Marys train station and bus depot.[11]

St Marys Hotel is located on Queen Street. The hotel opened in 1955 and was originally the St Marys Rex Hotel.[12]

The M4 Motorway sits along the southern boundary with entrance and exit ramps to Mamre Road leading to St Marys Town Centre (North) and the St Clair estate (South). The Great Western Highway is the major East/West road in the suburb. Sydney Street and Marsden Road are on the northern and southern boundaries.

Dunheved is a major industrial, and commercial centre to the north. Between March 1942 and March 1986 Dunheved was served by a branch rail line that left the main western line approximately 200 metres west of St Marys station as part of the Ropes Creek branch line that was constructed to serve the munitions works formerly operated by Australian Defence Industries. While the rail infrastructure was left in place for many years after the closure, other than Dunheved Station platform and Ropes Creek Station (within the Ropes Crossing estate), nothing remains of this branch line beyond Christie Street.