The largest city in Staffordshire is Stoke-on-Trent, which is administered separately from the rest of the county as an independent unitary authority. Lichfield also has city status, although this is a considerably smaller cathedral city. Major towns include Stafford (the county town), Burton upon Trent, Cannock, Newcastle-under-Lyme, Leek and Tamworth.

Wolverhampton, Walsall, West Bromwich and Smethwick were also in Staffordshire until local government reorganisation in 1974.

The historic boundaries of Staffordshire cover much of what is now the metropolitan county of West Midlands. An administrative county of Staffordshire was set up in 1889 under the Local Government Act 1888 covering the county except the county boroughs of Wolverhampton, Walsall, and West Bromwich in the south (the area known as the Black Country), and Hanley in the north. The Act also saw the towns of Tamworth (partly in Warwickshire) and Burton upon Trent (partly in Derbyshire) united entirely in Staffordshire.

In 1553 Queen Mary made Lichfield a county separate from the rest of Staffordshire. It remained so until 1888.

A significant boundary change occurred in 1926 when the east of Sedgley was transferred to Worcestershire to allow the construction of the new Priory Estate on land purchased by Dudley County Borough council.[2]

Under the Local Government Act 1972, on 1 April 1974 the county boroughs of the Black Country and the Aldridge-Brownhills Urban District of Staffordshire became, along with Birmingham, Solihull, and Coventry and other districts, a new metropolitan county of West Midlands. County boroughs were abolished, with Stoke becoming a non-metropolitan district in Staffordshire, and Burton forming an unparished area in the district of East Staffordshire. On 1 April 1997, under a recommendation of the Banham Commission, Stoke-on-Trent became a unitary authority independent of Staffordshire once more.

In July 2009 the largest hoard of Anglo-Saxon gold ever found in Britain was discovered in a field near Lichfield. The artefacts, known as The Staffordshire Hoard have tentatively been dated to the 7th or 8th centuries, placing the origin of the items in the time of the Kingdom of Mercia.

This is a chart of trend of regional gross value added of the non-metropolitan county of Staffordshire at current basic prices published (pp. 240–253) by Office for National Statistics with figures in millions of British Pounds Sterling.

Some nationally and internationally known companies have their base in Staffordshire.They include The Britannia Building Society which is based in Leek. JCB is based in Rocester near Uttoxeter. The theme park Alton Towers is in the Staffordshire Moorlands and several of the world's largest pottery manufacturers are based in Stoke-on-Trent.

Staffordshire has a completely comprehensive system with eight independent schools. Most secondary schools are from 11–16 or 18, but two in Staffordshire Moorlands and South Staffordshire are from 13–18. Resources are shared where appropriate, as per the example of Kingsmead Technology College, Blake High School and Norton Canes High School combining their sixth forms to create a "Sixth Form Consortium", which can offer a greater selection of subjects than each school could individually.

Two universities are located in the county. Keele University is located in Newcastle-under-Lyme. Staffordshire University has four campuses located in Stoke-on-Trent, Stafford, Lichfield and Shrewsbury.[7]

The modern county of Staffordshire currently has three professional football clubs – Stoke City and Port Vale both from Stoke-on-Trent and Burton Albion who play in Burton upon Trent.

Stoke City, one of the oldest professional football clubs in existence, were founded in 1863 and played at the Victoria Ground for 119 years from 1878 until their relocation to the Britannia Stadium in 1997. They were among the 12 founder members of the Football League in 1888.[8] By the late 1930s, they were established First Division members and boasted arguably the finest footballer in England at the time in right-winger Stanley Matthews, who had two spells with the club between 1930 and his retirement in 1965 at the age of 50.[9] In 1972, the club finally won a major trophy when they lifted the Football League Cup,[10] but after relegation from the First Division in 1985 they would not experience top flight football for 23 years.[11] After spending some two decades bouncing between the second and third tiers of the English league, they finally reclaimed their top flight status in 2008 by securing promotion to the FA Premier League – where they have remained ever since.[12] Stoke City reached their first FA Cup final in 2011, but lost to Manchester City.[13]

Port Vale, who like Stoke City play in Stoke-on-Trent, were formed in 1876 and became members of the Football League in 1892. After more than 70 years at various stadiums around the city, the club moved to its present home, Vale Park, in 1950. In early 1936, they had famously eliminated First Division champions Sunderland from the FA Cup. Another surprise FA Cup success came in February 1988 when they eliminated seven-time winners Tottenham Hotspur from the competition. Promotion to the Second Division for the first time since the 1960s was secured in 1989, and Vale would spent nine of the next 11 years at this level. However, the club has been less successful since the turn of the 21st century, and suffered relegation to League Two – the fourth tier of the English league – in 2008. Recently though the club has seen an upturn in its fortunes as the club was promoted from league two in the 2012-13 season and currently holds a place in Football League One.[14]

The county's other professional Football team is Burton Albion from Burton Upon Trent who currently play in Football League Two, after securing promotion from the Conference for the first time in the 2008–09 season.

The county has a number of non-league football clubs, including Tamworth,[15] Stafford Rangers,[16] Hednesford Town[17] and Leek Town.[18]

In cricket, Staffordshire is one of the nineteen Minor counties of English and Welsh cricket. It is represented in Minor counties cricket by Staffordshire County Cricket Club who have played in the Minor Counties Championship since 1895, a competition which it has won outright ten times, making it one of the most successful Minor counties teams. Among famous international cricketers produced by the county include Sydney Barnes and Dominic Cork, both of who went on to represent England.

In the north and in the south the county is hilly, with wild moorlands in the far north and Cannock Chase an area of natural beauty in the south. In the middle regions the landscape is low and undulating. Throughout the entire county there are vast and important coalfields. In the southern part there are also rich iron ore deposits. The largest river is the Trent. The soil is chiefly clay and agriculture was not highly developed until the mechanisation of farms.

Staffordshire County Council is the top-tier local council for the non-metropolitan county. For Eurostat purposes, it is a NUTS 3 region (code UKG22).

Staffordshire operates a cabinet-style council. There are 62 councillors for Staffordshire. The Full Council elects a cabinet of 10 councillors, including the council leader, from the majority party. Each cabinet member has their own portfolio about which they make the "day to day" decisions.[21][22]

Some settlements which were historically part of the county now fall under the county of West Midlands (county):

A type of bull terrier called the Staffordshire Bull Terrier was bred for hunting purposes in this county. They are known affectionately as "staffs", "staffies", and "nanny-dogs". Staffies should not be confused with the considerably larger American Staffordshire Terrier, American Pit Bull Terrier, and (English) Bull Terrier.

The only Cathedral in the county is Lichfield Cathedral in the city of Lichfield. The Diocese of Lichfield covers the whole county with the exception of Stapenhill and Amington, and much of the nearby county of Shropshire and the Black Country area of the West Midlands. The county is covered by the archdeaconries of Stoke-on-Trent and Lichfield. The current Bishop of Lichfield is Jonathan Gledhill and the current Bishop of Stafford Geoff Annas. There are 298 Church of England Churches in the County.

Staffordshire is part of the Roman Catholic Archdiocese of Birmingham. The current Archbishop is Bernard Longley.

Primitive Methodism was founded in Staffordshire by Hugh Bourne, a native of Stoke-on-Trent, at a public gathering in the village of Mow Cop. He originally followed the Wesleyan form of Methodism but in 1801 he reformed the Methodist service by conducting it outside. By 1811 with his brother he founded the first chapel in the Tunstall area of Stoke-on-Trent.[23]

The most popular Synagogue in the county is on London Road in Newcastle-Under-Lyme which opened in 2006 and replaced the former "Birch Terrace" Synagogue in Hanley[24] according to the 2001 census there were 407 Jewish People in the non-metropolitan area of Staffordshire,[25] and 83 is Stoke-on-Trent,[26]

Staffordshire has an extensive network of canals including the Birmingham and Fazeley Canal, Caldon Canal, Coventry Canal, Shropshire Union Canal, Staffordshire and Worcestershire Canal and Trent and Mersey Canal.

The county has relatively good links to the national roads network. Several major roads intersect the county, making it a popular location for commuters working in Birmingham.

The M42 has a junction in Tamworth at the south-east of the county, and heads south-west towards Birmingham. The M6 runs north through the county and junctions 10A-16 are in the county. The M6 Toll, the UK's first toll motorway, runs through the county with junctions in Weeford near Lichfield, Cannock and joins the M6 heading north towards Stafford.

The A5 and A34 run through the county. The former has been significantly widened to a dual carriageway at several sections, although much of it remains single carriageway.

There are currently no airports with scheduled flights in the county with the nearest ones being Birmingham, East Midlands and Manchester depending on the location there is however Wolverhampton Airport in Bobbington and Tatenhill Airfield near Burton-upon-Trent both of which are small airports catering for General Aviation.

Daily Newspapers in Staffordshire are The Sentinel covering Stoke-on-Trent, Newcastle-under-Lyme and the Staffordshire Moorlands, Burton Mail which covers the town of Burton-upon-Trent and the Express & Star which has several editions covering Tamworth, Lichfield, Cannock Chase and Stafford.

In Stafford there are three community radio stations – Stafford Radio, the UK's only radio station based in a Windmill, in the Broad Eye Windmill, and Stafford FM and BFBS, both of which will start broadcasting to the town on FM in the near future.

Staffordshire is predominantly covered by the ITV Central and BBC West Midlands television regions both of which have their studios in Birmingham. The far north of the county, around Biddulph, is served by ITV Granada and BBC North West from Media City UK in Salford.

Map of Staffordshire and its hundreds by Wenceslas Hollar some time between 1627–1677. 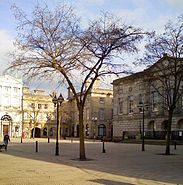 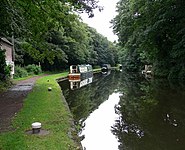