Familypedia
Register
Don't have an account?
Sign In
Advertisement
in: Dunham (surname), Born in 1918, Died in 1992,
and 9 more

Stanley is the maternal grandfather of Barack Obama (1961), who lived at his home from boyhood to high school. Obama knew him as "Gramps," and Stanley referred to him as "Bar." Obama sketches Stanley as a man with a wild streak early on who settled down to sell furniture and life insurance.

In high school in El Dorado, Kansas, Stanley was expelled for punching the principal in the nose. His young life was filled with adventures, living off odd jobs, “hopping rail cars to Chicago, then California, then back again, dabbling in moonshine, cards and women,” Obama wrote in his autobiography entitled Dreams from My Father. Described as "gregarious, friendly, impetuous, challenging and loud," he was a furniture salesman "who could charm the legs off a couch."

In 1940 Stanley fell in love with a woman from the good side of the tracks and married her. He eloped with Madelyn Lee Payne (1922-2008) just before the bombing of Pearl Harbor, on Dec. 7, 1941, and he was quick to enlist after the Japanese attack.

“He was really gung-ho,” remembers Ralph. “He didn’t have to go because he was married. He could have held off.”

Six weeks prior to D-Day, "Gramps" was a Supply sergeant stationed at Stoney Cross, England with the 75 men of the 1830th Ordnance Supply and Maintenance Company supporting the 9th Air Force of the US Army Air Corps.[2] His unit followed the front through France, servicing airfields known by numbers - A-2, A-44, A-71, and more - in places such as Brucheville, Cricqueville, St.-Jean-de-Daye, Peray, Clastres, Juvincourt and Saint-Dizier. In February 1945, at Saint-Dizier his unit was transferred to infantry and assigned to Patton's 3rd Army. Prior to that his unit supported 1st Army operations.

Stanley’s older brother Ralph Emerson Dunham, great-uncle to Barack, landed at Normandy's Omaha Easy Red beach on D-Day plus four. [3] Before the Invasion of Normandy, the brothers once met accidentally while Stanley went in search of rations at the Hotel Russell in London, where Ralph happened to be staying. [4]

During the war, Madelyn Dunham worked as supervison on the night shift at a Boeing B-29 assembly line in Wichita. Madelyn gave birth to a daughter whom they named Stanley Ann at Fort Leavenworth on November 29, 1942. After two years of military service in Europe (1943-1945), Stanley was discharged from the U.S. Army on August 30, 1945.

“Gramps returned from the war never having seen real combat, and the family headed to California, where he enrolled at Berkeley under the GI Bill,” Obama wrote. “But the classroom couldn’t contain his ambitions, his restlessness, and so the family moved again, first back to Kansas, then through a series of small Texas towns, then finally to Seattle, where they stayed long enough for my mother to finish high school.”

With Madelyn and Stanley both working full-time, the family moved to Berkeley, California, where Stanley briefly attended the university, but dropped out, then to Ponca City, Oklahoma, then to Vernon, Texas, and then to El Dorado, Kansas, where Stanley managed a furniture store. In 1955, Stanley and Madelyn moved to Seattle, Washington, where he worked as a salesman for the Standard-Grunbaum Furniture Company, and where their daughter Stanley Ann attended Eckstein Middle School. They lived in an apartment in the Wedgewood Estates in the Wedgwood, Seattle neighborhood. In 1956 they moved to the Shorewood Apartments on Mercer Island, a Seattle suburb, where they lived until 1960 and where their daughter Ann Dunham attended Mercer Island High School. In 1957 Stanley began working for the Doces Majestic Furniture Company.[5]

Madelyn and Stanley then moved to Honolulu. Madelyn started working at the Bank of Hawaii in 1960 and was promoted to be one of the first female bank vice presidents in 1970.[6] In 1970s Honolulu, both women and the minority white population were routinely the target of discrimination.[7]

Stanley Dunham died in Honolulu, Hawaii in 1992 and ashes are inurned at there at the Punchbowl National Cemetery. It was a small ceremony with a few of his bridge and golf partners in attendance, a three-gun salute, and a bugle playing taps, according to Obama's biography. Madelyn Dunham took care of her daughter in Hawaii in the months before Ann died in 1995 at age 52.[8] Her last interview was in 2004, on the occasion of her grandson's keynote address to the 2004 Democratic National Convention.[9][10]

Dunham's heritage consists of English and other European ancestors who settled in the American colonies during the 17th and 18th centuries. 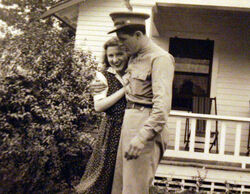 1,941: Stanley with wife Madelyn. Stanley enlisted in 1941 but does not have his sergeant stripes, so this is likely 1941 after his training at Leavenworth but before he shipped out to England. 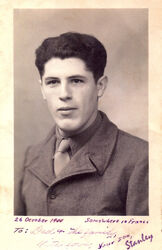 Possibly near Clastres, France since that is where his unit was when they were issued stoves before winter to keep them warm.[1] 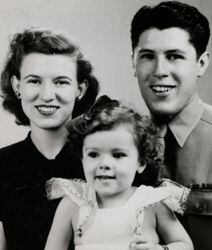 1,946: Stanley with Ann aged 4. The family was on vacation at Yosemite National Park, September 14, 1946 while Stanley was at UC Berkeley enrolled under the GI Bill. 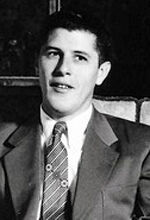 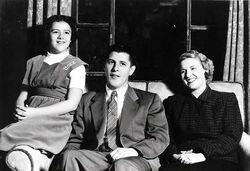 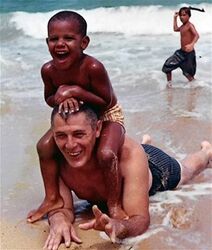 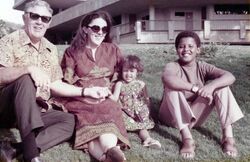 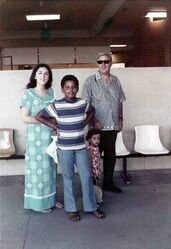 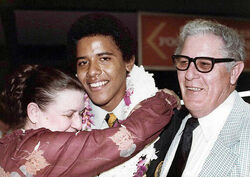 1,979: Obama at his Punahou High School graduation, with his mother and maternal grandfather "Gramps". 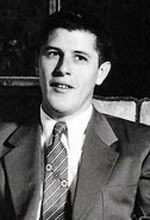