Familypedia
Register
Don't have an account?
Sign In
Advertisement
in: English families, Stanley family, Noble families of the United Kingdom

The Stanley family or Audley-Stanley family is a family with many notable members including the Earls of Derby and Barons Audley who are descended from the early holders of Audley, Staffordshire, England. The Audley family in the male line has lost prominence after their considerable estates were passed by a number of female heiresses in different branches of the family.

The use of "Stanley" as a first name began with political followers of the family.

The first mention of Audley, Staffordshire is in the Domesday book of 1086, when it was called Aldidelege (Aldithley), when the lands were held by an English thegn called Gamel. The descent of the Audley and Stanley families can be traced back as far as an Englishman named Ligulf of Aldithley, who held the estate not long after the Domesday survey but whose relationship, if any, to Gamel is unknown. The family later fabricated a Norman origin, at that time more prestigious than an English one, by presenting Ligulf, despite his non-Norman name and the English etymology of Aldithley, as the lord of a fictitious 'Aldithley in Normandy', and his son Adam as a follower of William the Conqueror.

The extended Audley family, originally of Audley Castle but who later built (or re-built) Heighley Castle, Madeley, Staffordshire in 1226, had several additional households including Red Castle at Hawkstone in Shropshire, Buglawton Manor in Congleton, Newhall Tower at Newhall, Cheshire[1] and a home in Nantwich.[2] In the early 12th century Adam's grandson William married Joan de Stanley heiress of Stoneleigh, Staffordshire thereby becoming William de Stanley of Stoneleigh. This branch of the Audley thus took the name Stanley and Thomas Stanley, 1st Earl of Derby was a direct descendant.

Another branch of the Audley family was created by Hugh Audley of Stratton Audley, Baron Audley from 1317, whose son became 1st Earl of Gloucester. His daughter and heir Margaret de Audley, 2nd Baroness Audley, was abducted by Ralph de Stafford, 1st Earl of Stafford, to become his second wife, which despite some scandal, the king allowed.

The last very prominent male to carry the Audley name was Thomas Audley, 1st Baron Audley of Walden KG, PC, KS (c. 1488 – 30 April 1544), an English barrister and judge who served as Lord Chancellor of England from 1533 to 1544, and earlier Speaker of the House of Commons. In typical Audley style, he left no sons and his estates passed via his daughter Margaret Audley, Duchess of Norfolk to the Howard family. She was both the cousin and sister-in-law of Lady Jane Grey, the latter by her first marriage to Lord Henry Dudley, the youngest son of John Dudley, 1st Duke of Northumberland, who later died.

Between 1405 and 1736 the Stanleys were first King of Mann and later Lord of Mann (this with some gaps), a title reflecting the special status of the Isle of Man, that was later sold back to the Crown.

The Audley and Stanley families and their descendants remained prominent throughout the history of England and Ireland into modern times. The Stanleys were, at one time, one of the richest landowning families in England.

Latham family and "Eagle and child" Coat of Arms[]

In 1385, Isabella de Lathom, the eldest daughter of parents who had no male heir, married Sir John Stanley and the Latham family (originally Lathom or Lothe Hom – "Brick house" from Lathom, Lancashire) and Stanley families became linked.[3] Following this marriage, the Stanley family adopted the 'eagle and child' arms of the Lathom family and continue to use it to this day.[4]

Several successive generations of the Stanley Earls, along with other members of the family, have been prominent members of the Conservative Party, and at least one historian has suggested that this family rivals the Cecils (Marquesses of Salisbury) as the single most important family in the party's history.

Arms of Audley: Gules, fretty or

Arms of Stanley: Argent, on a bend azure three buck's heads cabossed or 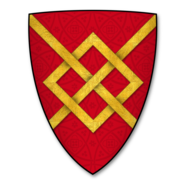 Armorial Bearings of the AUDLEY family of Much Marcle, Herefordshire

Arms of Audley, Earls of Gloucester

Arms of the Audley Family 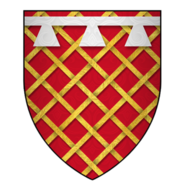 Arms of Arms of Sir James Audeley, KG from the Armorial Gelre

Arms of the Stanley Family descended from the Audley Family: 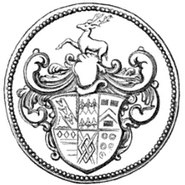 Medal of Thomas Stanley showing the Audley and Stanley arms

Arms of Stanley of Alderley 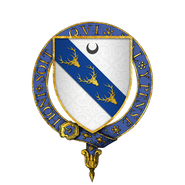 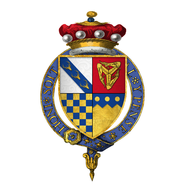 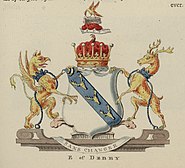 Arms of the Earls of Derby 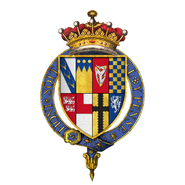 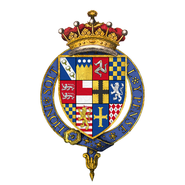