Familypedia
Register
Don't have an account?
Sign In
Advertisement
in: Cleveland (surname), Born in 1837, Died in 1908,
and 31 more

elected to the Presidency in the era of Republican

political domination between 1860 and 1912, after the American Civil War. His admirers praise him for his bedrock honesty, independence, integrity, and commitment to the principles of classical liberalism

. As a leader of the Bourbon Democrats, he opposed imperialism 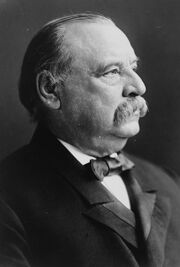