Familypedia
Register
Don't have an account?
Sign In
Advertisement
in: Târgu Secuiesc, Settlements in Covasna County, Cities in Romania, Market towns in Transylvania

The town was first mentioned in 1407 as Torjawasara, meaning in Hungarian “Torja Market”. (Torja is the name of a stream nearby and is also the Hungarian name of the nearby village Turia.) Originally, the Hungarian name Kézdivásárhely was also used in Romanian in the form Chezdi-Oșorheiu, but this was altered to Târgu Secuiesc after the accession to Romania in 1920 under the Treaty of Trianon. The Hungarian native name means “Kézdi Market”, Kézdi being the name of a Székely “seat”, a historical administrative unit. Its status as a market town dates back to the Middle Ages.

According to the 2011 Census the town had a population of 18,082, of which 16,446 (91%) were Székely Hungarians. The historical demographic evolution is as follows:

Demographic change according to census data: 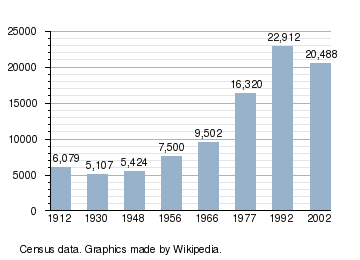 Despite its relatively small size the town has a few notable high schools: Nagy Mózes, Bod Péter, Apor Péter and Gábor Áron, all bearing the names of important Székely historical personalities. Because of this, Târgu Secuiesc is considered the educational center of the north eastern part of the county.