Back to template
Add topic

Are these suitable for genealogy?[]

The current list comes from Wikipedia. Not the same as the Australian Bureau of Statistics's divisions. GenWeb has only three divisions, much the same as the Dept of LG's regions. I think we need more than three but maybe not as many as what's here.

Here's a slightly changed version of the relevant discussion that has been moved from Talk:Regions of New South Wales:

Australian Bureau of Statistics divides Sydney into far more units than DLG and GenWeb do (notably including Gosford and Wyong, which are in the DLG's Hunter region and ODP's Central Coast; and splitting all three DLG/GenWeb regions and merging parts of them with parts of adjoining regions, which makes a lot of sense, e.g. if Wollondilly is not in the same region as Campbelltown and Camden, it should not be in the same region as Wyong). This is the start of its outline (with presumed names of the councils added by visual comparison with maps):

They produce maps to your specification too, e.g. People Born Overseas As a percentage of the total population Based on Place of Usual Residence, 2006; New South Wales (State) by Statistical Division

Their rules about copyright are a little vague. Especially with census-derived maps. Maybe we can have this one as "fair use" to illustrate the Sydney divisions: 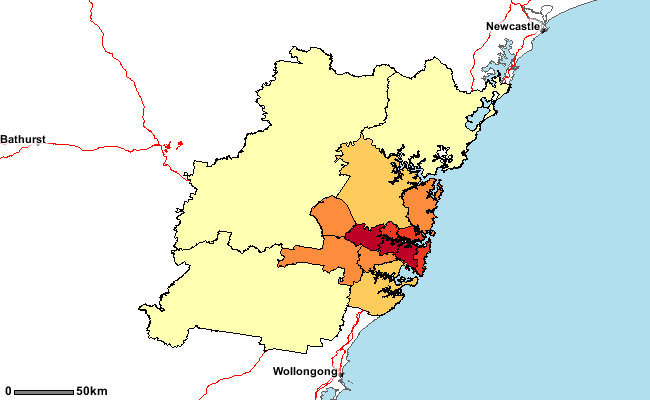