Familypedia
Register
Don't have an account?
Sign In
Advertisement
in: Tennessee River, Valleys of Tennessee, Valleys of Alabama 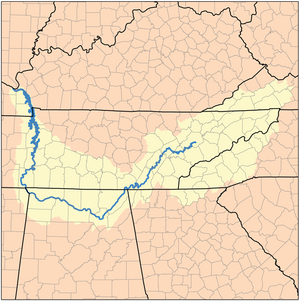 The Tennessee Valley is the drainage basin of the Tennessee River and is largely within the U.S. state of Tennessee. It stretches from southwest Kentucky to northwest Georgia and from northeast Mississippi to the mountains of Virginia and North Carolina. The border of the valley is known as the Tennessee Valley Divide.

Tennessee Valley is also a generally accepted term for North Alabama, anchored by the city of Huntsville.

The Tennessee Valley begins in the upper head water portions of the Holston River, Watauga River, and Doe River in Northeast Tennessee and Southwest Virginia. It travels southwest into North Alabama. The roughly 150 mile (240 km) stretch within Tennessee is bound on the east by the Appalachian Mountains (including the Great Smoky Mountains) and on the west by the Cumberland Plateau and Cumberland Mountains. Near Chattanooga, Tennessee, the Tennessee River cuts though the Cumberland Plateau creating a canyon called the Tennessee River Gorge before it enters northern Alabama. The 100 mile (160 km) Alabama stretch of the valley runs mainly west before turning back north and re-entering Tennessee. In Alabama, the valley is bound on the north by the southern end of the Cumberland Plateau. On the south it is bound by the southern end of the Appalachians.

The valley continues back north into Tennessee, creating the dividing line between Middle Tennessee and West Tennessee, eventually reaching to the Ohio River in Western Kentucky, where it divides the region known as the Jackson Purchase from the rest of the state.

Geologically, the eastern Tennessee Valley consists of many small valleys and ridges within a great valley. The region is termed the Ridge and Valley Province and the great valley is termed the Great Appalachian Valley.